'Was a peaceful gesture, taken out of context'.

Luke Shaw has offered to speak up on behalf of the Manchester United fan.

Tuesday night at Old Trafford saw 10,000 supporters file into the ground to see United play there, in person, for the first time in 14 months.

END_OF_DOCUMENT_TOKEN_TO_BE_REPLACED

Given that Old Trafford had been subject to a break-in, earlier this month, by United fans protesting against the Glazer family's ownership of the club, and its' leading role in the European Super League plot, there was an increased security presence for the game. It went off with few hitches and the supporters were allowed carry in 'Glazers Out' signs and paraphernalia.

While the result, and performance, may have been underwhelming, United fans at least got to witness Edinson Cavani's sublime finish from 40 yards out:

Edinson Cavani picks a sublime way to welcome the fans back to Old Trafford 🏹 pic.twitter.com/LRbVr17I9E

END_OF_DOCUMENT_TOKEN_TO_BE_REPLACED

The game ended 1-1 after Joe Bryan's late equaliser, with United unable to find a winner in the final eight minutes. Following the game, Ole Gunnar Solskjaer called the result 'a wake-up call', which is the team's third wake-up call in a row, after home defeats to Leicester and Liverpool, last week.

And while there was a lot of focus on United players Amad Diallo and Paul Pogba carrying a Palestinian flag around the pitch after the game, there was a minor but significant non-footballing incident during the match itself.

As United left-back was going over to take a corner, in the first half, a fan tossed a green and gold scarf [representing the club's Newton Heath roots, and an anti-Glazer symbol] in his direction.

Jimmy McBride, who was at the game, noted how the supporter had been taken away by security staff:

Lad who threw the green & gold scarf on to @LukeShaw23 when he was taking the corner got hauled out by the security just after the goal ... wouldn’t mind Luke was laughing & so where half the stewards around the pitch it’s not like it was anything that could cause him any harm ☹️

END_OF_DOCUMENT_TOKEN_TO_BE_REPLACED

Later that evening, that fan came forward on Twitter to give his side of the tale.

Stating that he was facing a three-year ban from the ground, he surmised that his planned trip to Gdansk to support United in the Europa League final, next week, was out of the question.

Was thrown to Luke in a good manner. Nothing aggressive. Was told by the Stewards I’m facing a 3 year ban. All paid up for Gdańsk next week and this looks like it could be the end of the road for me. Was a peaceful gesture that was taken out of context. Luke shaw laughed...🇾🇪 https://t.co/oboyPBKjB5

This is where Luke Shaw reappeared in the tale. Shaw, who is destined for England's European Championship squad this summer, wrote:

'I understand completely, first match back at Old Trafford , emotions are high. I know there was nothing aggressive towards what you did. I will try my best to speak with someone and sort it out.'

I understand completely, first match back at old Trafford , emotions are high. I know there was nothing aggressive towards what you did. I will try my best to speak with someone and sort it out 👍🏽

The supporter may have been trying to recreate the moment, in 2010, when David Beckham, who was playing for AC Milan at the time, donned a 'Love United, Hate Glazers' green and gold scarf after it had been thrown to him. 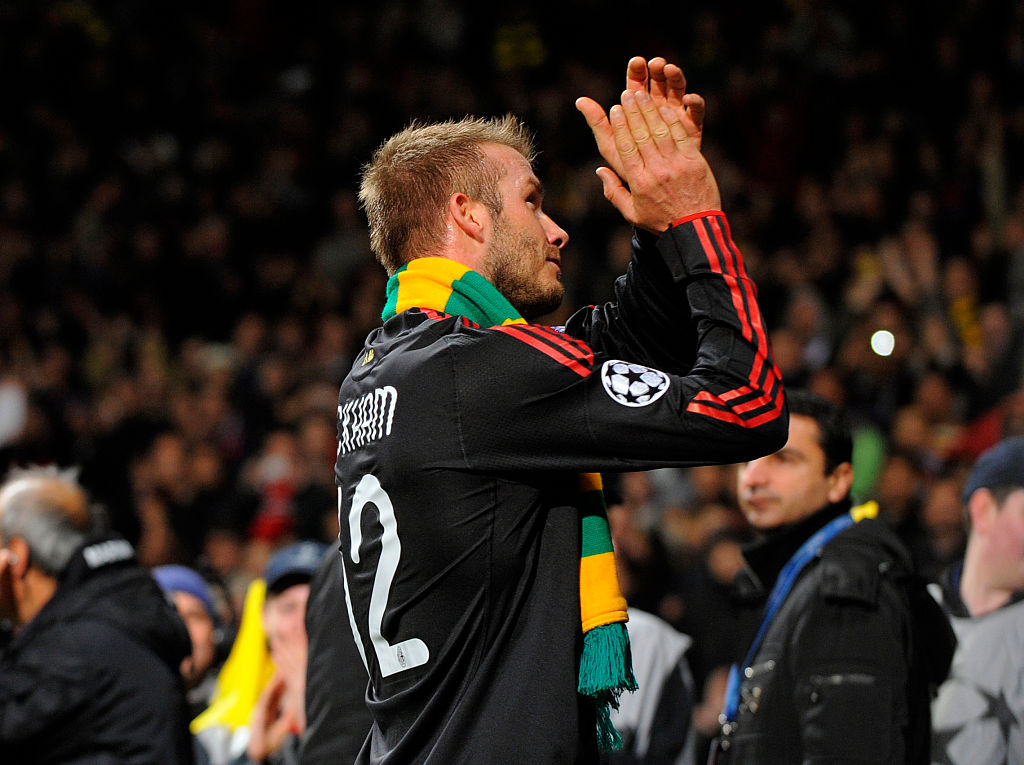 David Beckham of AC Milan puts a Love United Hate Glazer green and yellow scarf around his neck as he leaves the field in protest of the American owners, the Glazer family of Manchester United (Photo by AMA/Corbis via Getty Images)

It will be interesting to keep track of this situation, to see if any ban is imposed on the United fan.