As Wednesday nights go, it was pretty eventful.

Arsenal did an Arsenal, collapsing against Bayern Munich as their season imploded in 15 catastrophic second-half minutes.

Meanwhile, back in Dublin, the government won a vote of confidence called in the wake of the latest twist in the Maurice McCabe Garda whistleblower saga.

However, despite that vote, it is being reported this morning that Taoiseach Enda Kenny's days as leader of Fine Gael are numbered.

Arsene Wenger must realise that this is what the end looks like | @dionfanning https://t.co/b1Of7bz1MZ

Under pressure from his party, the Taoiseach may stand down within a week - leading many to wonder who will cling on to power longer: Kenny or Arsene Wenger. 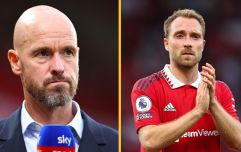 END_OF_DOCUMENT_TOKEN_TO_BE_REPLACED

While it seems like Kenny has been in power forever, he only replaced Michael Noonan as leader of Fine Gael in 2002 - six years after Wenger took charge of the Gunners.

Kenny became the first Fine Gael Taoiseach to win a second term in office last year, but like Arsenal, his best days are behind him. Both Wenger and Kenny are this morning realising that all power is fleeting.

Just like enda,it appears that wenger has stayed on a little too long!

Arsene Wenger and Enda Kenny have a lot in common - everyone keeps saying they'll be gone in a week, yet they go on forever.

Arsene Wenger and Enda Kenny are kindred spirits. Neither know when it's time to go. #Dail #ChampionsLeague #FCBvAFC

Are Enda Kenny's & Arsene Wenger's fate the same, long time leaders who had their successes but soon to be gone from their jobs #dail #UCL

What do you think?

Who will step down first?


popular
Peter O'Mahony riled by "petulant s**t" as Munster toasted by Dragons
Grim injury news for Seabelo Senatla after Bundee Aki's red card clear-out
The largely ignored reason Ireland rely on James McClean and Jeff Hendrick so much
The return of Paul Mannion and Jack McCaffrey proves that Pat Spillane is wrong about split season
The clear-cut differences between what Stephen Kenny and Dara O'Shea said, last night
Ireland player ratings as Stephen Kenny’s team survive scare against Armenia
"When I give a slap, you feel it" - Israel coach slaps player during playoff win over Ireland
You may also like
3 weeks ago
Roy Keane got a great reaction out of Christian Eriksen with a droll Ireland reminder
3 weeks ago
Roy Keane shoots down Arsenal claims after Man United defeat
3 weeks ago
Roy Keane's debatable pre-match prediction about Arsenal eventually rang true
3 weeks ago
Man United ratings: Marcus Rashford double settles it against Arsenal
3 weeks ago
Roy Keane cracks classic joke as he recalls epic Man United vs Arsenal rivalry
4 weeks ago
Transfer Deadline: The one player your club desperately needs to sign
Next Page