The Reds have already won the FA Cup and Carabao Cup.

Liverpool have announced that they will hold a victory parade next weekend, even if they fail to win the Premier League title or Champions League final.

Jurgen Klopp's men still have the opportunity to secure an unprecedented quadruple this season, with two trophies up for grabs in the next nine days. Having already won the FA Cup and Carabao Cup, the Reds are looking to end a remarkable season on a high. 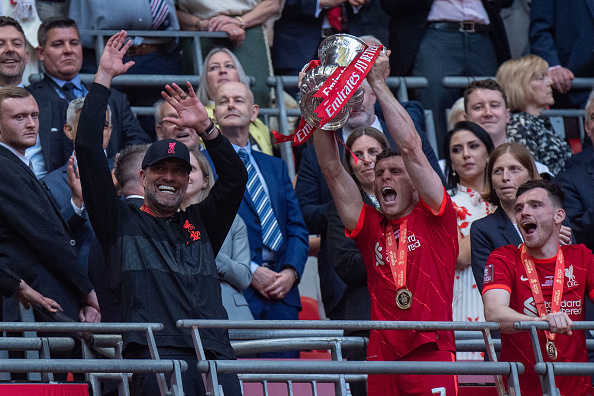 END_OF_DOCUMENT_TOKEN_TO_BE_REPLACED

The Reds go into the final day of the Premier League campaign just one point behind league-leaders Manchester City.

The Merseyside outfit will also face off against Real Madrid in the Champions League final in Paris on May 28.

END_OF_DOCUMENT_TOKEN_TO_BE_REPLACED

Despite the possibility of Klopp's squad finishing with just the FA Cup and Carabao Cup, Liverpool will still hold a victory parade in the city on May 29.

The Mayor of Liverpool, Joanne Anderson, had previously invited the club to participate in a victory parade in preparation to celebrate another memorable campaign.

After last week's FA Cup final triumph over Chelsea on penalties, the Reds will have at least two trophies to celebrate after also overcoming Thomas Tuchel's side in the Carabao Cup final in February.

🚨 NEW: A Liverpool FC victory parade will take place in the city on Sunday 29 May. Following last Saturday’s Wembley win, this has been extended to include the FA Cup and the Liverpool Women, as well as any potential outcome of the rest of the season. #awlive [culture liverpool] pic.twitter.com/Hg07GCiCrI

The parade will also feature a bus with members of the Liverpool Women's squad, who won their league title and secured promotion back to the Women's Super League.

The Mayor of Liverpool keen to celebrate 'incredible achievement'

Mayor Anderson said: "We're delighted that we can now confirm the club will definitely parade around the city on May 29 – and I'm pleased we will be celebrating the achievements of both the men and women's teams.

"A huge amount of work goes on behind the scenes in preparation for an event of this size and scale, so it's fantastic that the city is now going to be able to experience this.

"Lifting the FA Cup, the Carabao Cup and the FA Women's Championship trophy is an incredible achievement that deserves to be acknowledged and we have everything crossed that they won't be the only trophies they are lifting on the day!

"Whatever the outcome of the end of the season and the Champions League final, Liverpool FC and Liverpool FC Women have already done us proud, and we will give both teams the homecoming celebration they deserve."

It will take place from 4pm Sunday 29 May & all costs will be covered by the club.

Thousands of Liverpool supporters lined the streets back in 2019 to celebrate the Reds winning their sixth European Cup against Tottenham in Madrid.