Just kick it away, mate

Liverpool raced into an early two-goal lead against Manchester City in the FA Cup semi-final on Saturday, thanks to a goalkeeping gaffe from Zack Steffen. Alan Shearer was not the only one stunned by the error.

The American, who replaced Ederson between the sticks having played in City's previous FA Cup fixtures, failed the dig the ball out of his feet and clear the danger before Sadio Mané closed him down and forced the goal.

The error compounded what was already a disappointing start from a heavily rotated City team, having conceded a towering header from Ibrahima Konaté in the ninth minute. 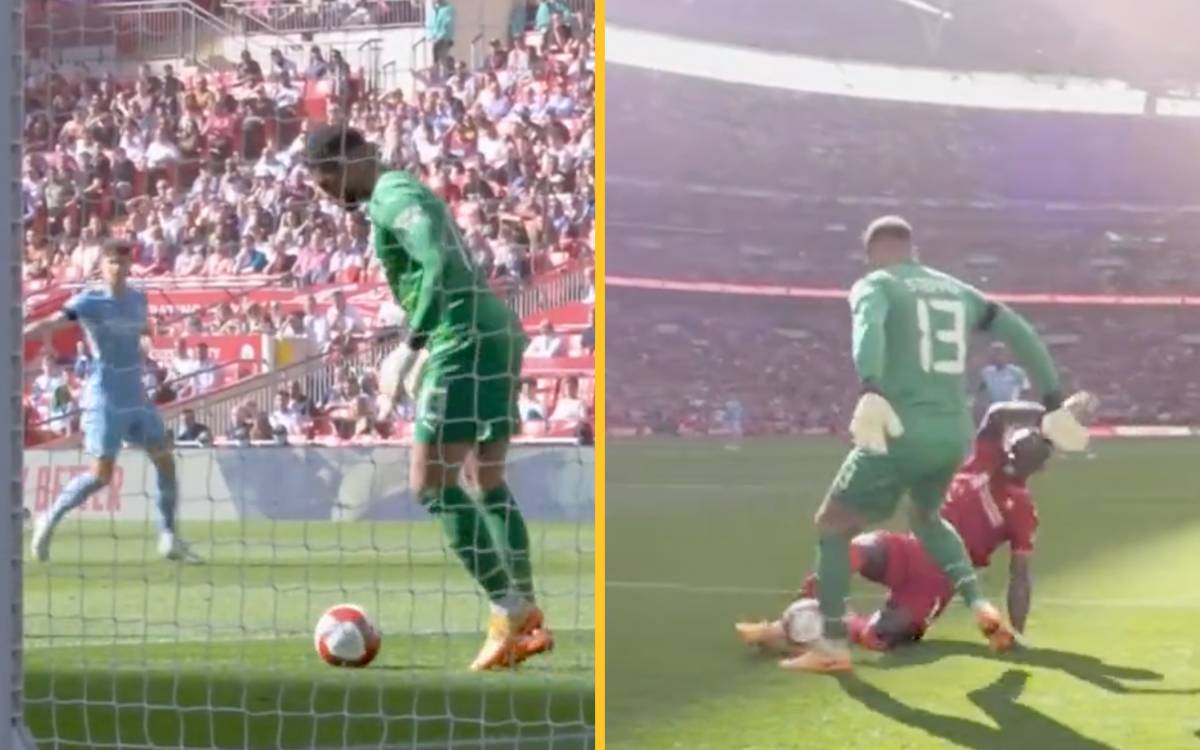 END_OF_DOCUMENT_TOKEN_TO_BE_REPLACED

Liverpool dominated the first half an hour, enjoying a slim majority of possession and preventing City from creating any chances of real worth. City, meanwhile, lining up in a strangely arranged 4-4-2 system, were evidently missing Kyle Walker and Kevin de Bruyne, both of whom missed the game through injury.

Mané made it 3-0 before the half-time break, only for City to stage a second half comeback with goals from Jack Grealish and Bernardo Silva. The Reds held on in a tense finish, though, and won 3-2 to reach their first FA Cup final in a decade.

Following the game, former Newcastle and England striker Alan Shearer stressed that both sides' goalkeepers were the difference. He told the BBC:

"Liverpool were certainly gifted one goal and I think the goalkeeper should have done better with the other two as well.

"Big decisions from Jurgen Klopp in terms of his team selection have helped win the game because there's no doubt he played his number one goalkeeper.

"Manchester City didn't and, ultimately, their goalkeeper has made mistakes which have cost them. Alisson in that second half, pulled off two very good saves - one, the one-on-one from Jesus, was superb. And that's what's turned out to be the difference."

Absolutely no-one was arguing with that.


popular
Jamie Carragher on the two Man United players Erik ten Hag can't trust
"I went up to the Italians and gave them a big auld shoulder" - Paul O'Donovan does it again
Wexford Under-20 lights it up as Ferns win their first ever county title
Man United have 'decided to sell' promising midfielder James Garner
Wexford, Waterford and Kilkenny down some good men as Australia calls
Carragher and Neville brutally name Man United's biggest transfer flops since 2013
Graeme Souness under fire for calling football a ‘man’s game' while sat with Karen Carney
You may also like
1 day ago
Thomas Tuchel explains what sparked hand-shake scenes with Antonio Conte
1 day ago
Declan Rice apologises after Dean Henderson makes penalty save admission
1 day ago
"I can't see any dive there" - When Roy Keane was victim of a dreadful call against Liverpool
1 day ago
"I will not admit that" - Erik ten Hag irked by press conference question about his tactics
1 day ago
Wexford's Festy Ebosele makes Serie A debut at San Siro, and goes in hard on Divock Origi
2 days ago
Gary Neville highlights Erik ten Hag decision that 'backfired spectacularly' at Brentford
Next Page