There's so much going on in one video

The FA Cup final is a big day. From getting goosebumps to hearing 'Abide with Me' (unless you're a Liverpool fan, for some reason) to the hope of watching your side win football's oldest cup competition, it can be the best day of some supporters' lives.

For some, however, the emotion of the day can get too much and tensions can boil over, leading to the odd altercation. That's what happened in the aftermath of Liverpools penalty shootout win over Chelsea on Saturday.

END_OF_DOCUMENT_TOKEN_TO_BE_REPLACED

After the game both sets of fans began to make their way home. Liverpool fans were, understandably, in a buoyant mood while Chelsea fans left Wembley feeling slightly flat.

As some Liverpool fans bumped into Chelsea supporters on a London Underground/Overground line, they were keen to rub salt in the wounds.

One fan, sitting on the train, can be heard shouting "Show us your flag lad!" to Blues supporters on the platform.

A Chelsea fan wearing a protective boot duly obliges, showing his flag by throwing it into the train. It appeared to miss by an inch but that didn't stop them from retaliating.

What followed next can only be described as comedy gold.

The content you never knew you needed until now 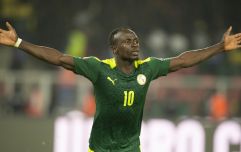 END_OF_DOCUMENT_TOKEN_TO_BE_REPLACED

Incensed by the flag throw one of the Liverpool fans then gets up and tries to push him back with a karate-esque kick. Emphasis on the word 'tried.'

The Chelsea fan, wielding a crutch, instead tried to defend himself with his protective boot, but he didn't need to as the Liverpool fan slipped and fell straight to the ground.

Thankfully he saw the funny side but the Chelsea fan decided to channel his inner Luke Skywalker as he hoisted his crutch in the air. He was primed and ready for battle.

Sadly, we never got to see anymore of the outcome as the tube doors then shut and the Liverpool fans whizzed off into the distance. Nonetheless, it was the battle of the ages and a lot more exciting than the final itself.


popular
Liverpool set £60m Mo Salah price as contract talks continue
Glass half full as Derry's positive play produces five fantastic goals to reach All-Ireland semis
QUIZ: How many of the 10 most successful football counties can you name without making a mistake?
Éamonn Fitzmaurice explains Aidan O'Shea's best position and how it can be used against Kerry
Patrick Vieira claims he was 'much better' than Roy Keane in new interview
Matt Le Tissier says he asked Sky Sports why they never sacked Jamie Carragher
Conor McGregor and Floyd Mayweather 'in talks' about a rematch
You may also like
1 week ago
Jay Spearing linked with surprise Liverpool return
1 week ago
Liverpool wrap up their transfer business before Man United even sign a player
1 week ago
Liverpool to face four of the 'big six' after Champions League fixtures
1 week ago
Benfica agree €100m deal with Liverpool for Darwin Nunez
2 weeks ago
Caoimhin Kelleher comments on his Liverpool future ahead of next season
2 weeks ago
Sadio Mane insists he was joking about Liverpool future comments
Next Page