This is a team that needs to win a match.

Europa League semi-final second leg. Liverpool need to score or they're out. Simple as that.

And Jurgen Klopp has picked the team to do just that.

Seven changes to the side that went down to Swansea at the weekend, the German isn't messing around for the visit of Villarreal who have a 1-0 advantage from the first leg. 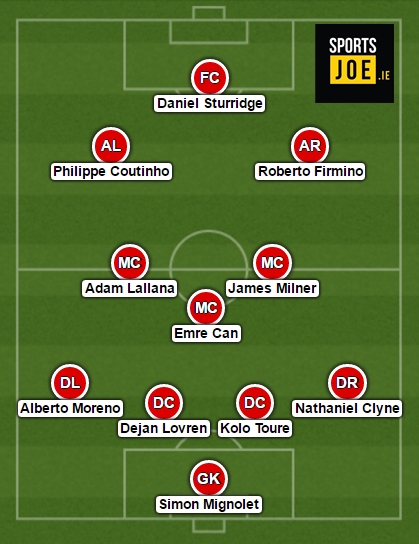 END_OF_DOCUMENT_TOKEN_TO_BE_REPLACED

Lucas drops to the bench to make way for the return of Emre Can who has missed the last five games.

It was thought that the midfielder could be out for much longer after his initial diagnosis but he is back and he is straight in the team.

The #LFC starting line-up and bench for tonight's meeting with @VillarrealCF in full pic.twitter.com/dDd1Vsf3Xc

It's 1-0 on aggregate ahead of the return leg in Anfield. The Spaniards come defending the lead.

We're in Liverpool for the big match. Click here to add us on Snapchat.


popular
Galway fans' frosty reception for Davy Fitz doesn't make any sense
The most Stone Age tackle you've ever seen gets South African lock straight red card
Michael Schumacher paralyzed and suffering from memory and speech problems
'Brian was a genius... he would've killed you to even win a game of touch'
Ryan Manning hacked to the ground by Henri Lansbury in ruthless assault
"Johnno went, 'We’re not moving! You're trying to mess us about!'" - Ben Kay recalls red carpet controversy
"20 seconds of lunacy" sees Joao Felix red-carded against Athletic Bilbao
You may also like
5 days ago
Harvey Elliott donated Liverpool shirt and boot to young fan in hospital
5 days ago
Marcus Rashford sends message to Harvey Elliott after he is stretchered off
3 weeks ago
Cristiano Ronaldo will "struggle against Virgil Van Dijk" according to Graeme Souness
1 month ago
Liverpool condemn supporters' offensive chant directed at Billy Gilmour
1 month ago
20 BBC pundits provide their Premier League title predictions and there's only two teams in the running
2 months ago
One year ago today, three decades of bitterness, pain and grudges were unleashed
Next Page