When you need someone to save the day, look no further than Lionel Messi.

Barcelona had to be content with a 1-1 draw with Villarreal at the Estadio El Madrigal.

It could have been so much worse for the Catalans, as they went behind to Villarreal early in the second half thanks to a goal from Nicola Sansone. 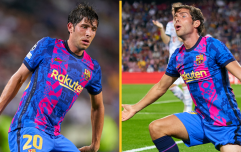 END_OF_DOCUMENT_TOKEN_TO_BE_REPLACED

The goal came as Barcelona lost possession on the edge of Villarreal's box, a quick counter attack ensued and it was Sansone who put the hosts a goal to the good with a cool right-footed finish into the bottom corner.

Villarreal frustrated their opponents for the rest of the match with some great defensive efforts and it looked like the home side's record of only conceding six goals at the Estadio El Madrigal was to remain intact.

However, even having the best defensive record in La Liga cannot discourage a player of Messi's quality.

The Argentinian won a free kick outside of Vilarreal's penalty area.

The 29-year-old stepped up and planted an absolute beauty of a free-kick into the top corner of the net.

The Villarreal goalkeeper was completely rooted to the spot and could only look on as his side conceded a cruel, late equaliser.

The away side definitely deserved a draw but it now means Barcelona have lost further ground on Real Madrid.

Barcelona now lie in third position, five points behind Real Madrid and one point behind Sevilla.

It gets worse for Barcelona, Real Madrid have a game in hand over their fiercest rivals so the gap between the two teams could become much greater.


popular
The most Stone Age tackle you've ever seen gets South African lock straight red card
Galway fans' frosty reception for Davy Fitz doesn't make any sense
Michael Schumacher paralyzed and suffering from memory and speech problems
Ryan Manning hacked to the ground by Henri Lansbury in ruthless assault
"Johnno went, 'We’re not moving! You're trying to mess us about!'" - Ben Kay recalls red carpet controversy
"20 seconds of lunacy" sees Joao Felix red-carded against Athletic Bilbao
'Brian was a genius... he would've killed you to even win a game of touch'
You may also like
1 month ago
The frustrating reason Lionel Messi couldn't take a bigger Barca pay-cut
1 month ago
How losing Lionel Messi could cost Barcelona €137 million
1 month ago
Umtiti skips trophy celebrations after being booed by Barcelona fans
1 month ago
Lionel Messi admits biggest Barcelona regret in emotional press conference
1 month ago
Barcelona bid farewell to Lionel Messi with emotional video
1 month ago
Neymar responds to potential Messi reunion at PSG
Next Page