The end of an era

Lionel Messi has communicated to Barcelona that he wants to leave the club and will activate a clause to end unilaterally his contract, according to TyC Sports.

His decision to call time on his career at Barcelona comes following the most humiliating defeat he has suffered while playing for the club, losing 8-2 in the Champions League quarter final to Bayern Munich.

It was after that game that rumours started to circulate that Messi had come to the end of his tether at Barça, as journalist Marcelo Bechler, the man who first broke the news that Neymar would move to PSG, reported that Messi wanted a move. 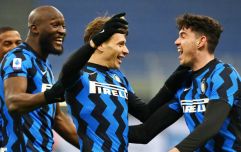 END_OF_DOCUMENT_TOKEN_TO_BE_REPLACED

It is a situation that neither the club nor Messi ever wanted to happen. He would happily spend the rest of his career at the Camp Nou if he had any faith in the board to oversee the sort of changes the club has needed for a while. But having dragged Barcelona to title wins in 2018 and 2019, not with the help of the board's recruitment but in spite of it, he does not owe them anything more.

He has given his best years to the club, has not won a Champions League for five years, and does not want to waste any more time at a club going through a rebuild as his legs begin to wane.

Where he goes now is another matter, but there will not be a shortage of takers for the greatest player of all time.

popular
The SportsJOE 12 o'clock quiz | Day 286
QUIZ: You have 30 seconds to answer this one tricky football question
SportsJOE 2000s Football Quiz | Round 11
"Djokovic is a tool" - Tennis world turned upside down in day of days
You'll have to be a diehard fan to get 20/20 in this Liverpool players of the 90s quiz
"Newcastle fans have been served up dire tripe for about ten years"
Wayne Rooney story about Memphis Depay shows why he failed at Manchester United
You may also like
18 hours ago
Arsenal fans unhappy as Mustafi bids farewell to "unselfish" Mesut Ozil
1 day ago
Jurgen Klopp calls Man Utd style 'the worst thing you can face in the world' after draw
1 day ago
Jordan Henderson says Liverpool were frustrated by "strange" half-time whistle call
1 day ago
Liverpool fans complain at timing of half-time whistle in Man Utd draw
2 days ago
QUIZ: Can you name the Scottish football cult heroes?
2 days ago
Mesut Özil all but confirms Arsenal exit with not so cryptic tweet
Next Page