His buyout clause is €500 million.

Trincão is a relative unknown to British football fans, having just arrived at Barcelona following an announcement in January that he would join them from Portuguese side Braga, where he played just 33 games.

But, according to Fabrizio Romano, Leicester appear very keen to sign the promising Portuguese forward, with their first bid comprising a season long loan with an obligation to buy for €50m next summer.

The English club that is trying to get Francisco Trincão from Barcelona is Leicester.
The first bid was a loan with obligation to buy for €50M total.
Still no agreement with Barça and many clubs interested - but talks are on. Atalanta not in the race atm. 🇵🇹🔵 #LCFC #Barça

Trincão might not have played for Barcelona yet - and increasingly looks like he never will - but in his 28 league games at Braga, he recorded eight goals and eight assists. Not bad for a teenager.

When he signed for Barcelona, a €500m release clause was put in his contract. This sounds absurd, because it is absurd, but does not mean Barcelona will hold out for that much money. Release clauses are obligatory in Spain and after Paris Saint-Germain poached Neymar from Barça after triggering his €220m release clause, Barça have ensured that they avoid the risk of that happening again. 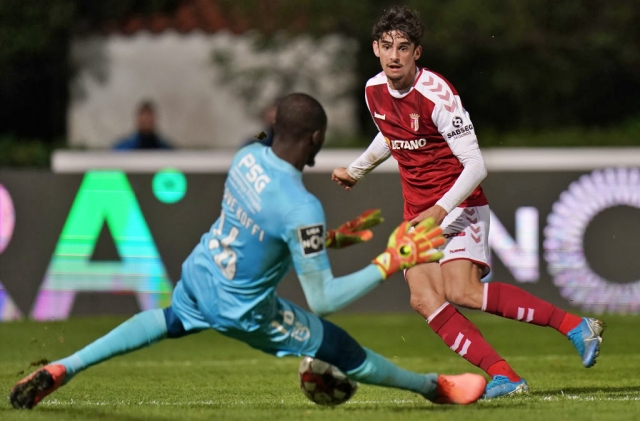 Francisco Trincao of SC Braga takes a shot on Belenenses goalkeeper Herve Koffi in January of this year. (Photo by Gualter Fatia/Getty Images)

END_OF_DOCUMENT_TOKEN_TO_BE_REPLACED

Leicester are looking to strengthen their forward line, with Jamie Vardy the only consistent performer of the 2019/20 season. Harvey Barnes has shown a lot of promise but needs to be afforded time to develop, while Demarai Gray has not lived up to expectations.

Trincão's favoured position is on the right of the front line, where Ayoze Perez played for most of the season pre-lockdown. But should Trincão arrive at the King Power, it would allow Perez to move back into his preferred central role, giving close support to Vardy.

popular
How The Mountain lost 36kg ahead of boxing fight with The Beast
Sam Bennett's green jersey masterclass got Lance Armstrong talking
Irish cyclist Sam Bennett delivers classic putdown to British cycling magazine
"He's found a way to do it. Whether that's good or bad for the game, I don't know"
The SportsJOE 12 o'clock quiz | Sam Bennett special (Day 184)
The SportsJOE 12 o'clock quiz | Day 182
The Ireland XV we would start against Italy
You may also like
17 hours ago
"We never ever do that. Okay?" Klopp scolds Liverpool bench for reaction to red card
1 day ago
PSG begin talks to sign Dele Alli from Tottenham Hotspur
2 days ago
How Tottenham should line up with with Gareth Bale and Sergio Reguilón
2 days ago
Liverpool's deal to sign Diogo Jota as canny as they come
6 days ago
Premier League fans to return to stadiums in October despite Covid-19 spike
1 week ago
Connolly joins Liverpool and Man United pair in Premier League break-out star predictions
Next Page