Karim Benzema has admitted he had a role in an alleged sex tape blackmail plot against fellow France international Mathieu Valbuena.

Spanish outlet AS are reporting that the French star made the confession after being questioned by police in Versailles on Wednesday morning.

Benzema acknowledges during his declarations that he was involved in the Valbuena case. https://t.co/BcBuCMB9OR 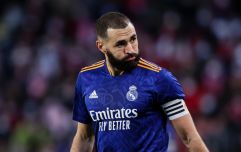 END_OF_DOCUMENT_TOKEN_TO_BE_REPLACED

The 27-year-old Real Madrid star has claimed he himself was a victim of blackmailers, a source told the Daily Mail on Thursday.

According to a source, Benzema mentioned the sextape to Valbuena during a meeting of the French squad in October.

It is thought that one of Benzema's relatives was contacted by the suspected blackmailers to try to get Benzema involved in their scheme, the source said.

Police are reportedly seeking to determine whether Benzema was teasing Valbuena when he brought up the tape, or attempting to make him pay the blackmailers.

UPDATE: AFP are reporting that Benzema has been charged with "complicity in an attempt to blackmail" and conspiring to commit a criminal act. This is punishable by up to five years in prison.

French news outlet M6 are reporting that there is evidence to back up the allegations of him being linked to the sextape.

Benzema has reportedly been recorded on a phone call talking directly about the Valbuena sextape where he said,

"Do not worry. He has no choice. I’ll make him understand. He’ll pay."


popular
From Canada to Carlow in the name of hurling: Nicolas Redmond's journey to the Fitzgibbon Cup
Kerry's captain selection for 2022 sums up the problem with their outdated system
Jesse Lingard 'angered by lack of respect' shown by Man United
"It must be difficult to say no, having won a game and heading back together"
Chelsea forced to change Stamford Bridge changing room after Liverpool complaint
Outrage after Sadio Mane allowed to play on for 10 minutes after being knocked out
Roy Keane has heaped praise on Trent Alexander-Arnold
You may also like
3 months ago
Undeniable truth: Why Karim Benzema deserves a Ballon d'Or
10 months ago
WATCH: Benzema with a stone-cold stunner to save Madrid's blushes
3 years ago
Michael Owen speaks about the player Man United wanted to sign instead of him
3 years ago
Karius gifts Benzema the strangest Champions League final goal ever
3 years ago
Reports indicate that Gareth Bale could start for Real Madrid
3 years ago
Bayern Munich goalkeeper commits worst goalkeeping error of the season against Real Madrid
Next Page