If you asked Liverpool fans which players in their current squad were irreplaceable, the most common answers would probably be Virgil van Dijk and Mo Salah.

Van Dijk is the glue that holds their defence together, while Salah finishes off most attacking moves with his lethal finishing. His goals have become invaluable. 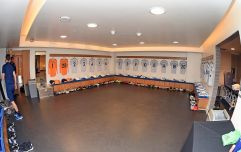 END_OF_DOCUMENT_TOKEN_TO_BE_REPLACED

Consequently, it would take an astronomical bid to convince Liverpool to even consider letting the Egyptian leave. But Juventus are reportedly willing to offer £175m, as well as chucking Paulo Dybala into the offer as a makeweight, according to Italian paper Tuttosport.

Dybala is understood to be unhappy with his current situation at Juve. The Argentine forward stormed straight down the tunnel during their recent 3-3 draw with Parma after manager Max Allegri opted to bring Emre Can off the bench as his final substitution.

While Liverpool may not want to sell Salah, they could do much worse than Dybala coming in as a replacement. The diminutive, versatile striker is adept at playing through the middle or cutting in from the right as Salah has done during his time at Liverpool.

Juventus have denied the reports, with sporting director Fabio Paratici asserting that Dybala will stay put. Speaking to Gazzetta dello Sport, Paratici said: "Dybala remains. Only those who want to leave go away from Juventus. I repeat, our players are difficult to improve.

"With who can we improve on Dybala? Hard. Messi perhaps, already with Neymar I would have doubts.

"And Dybala is one that you always have at the end. Play all the games, he is present. When you look at the team you always find the sign of Dybala."

But with Juventus desperately trying to cut their wage bill after signing Cristiano Ronaldo and more recently Aaron Ramsey, letting Dybala go could become increasingly likely the closer we get to the summer transfer window.

He has only scored eight goals this season for Juve, with his last coming in December.


popular
"It’s hard not to respect Johnny, even if you don’t like him!" - Dan Biggar
Martin McHugh: Them lads were stronger than the modern day player who's lifting weights all the time and doing no manual work
"I was in the Blackrock end goal looking up to the heavens saying, "Get us through it" - Kerins following his late father's footsteps
Dessie Farrell set to cut large chunk of Dublin players as panel is reduced for league campaign
Quiz: Which footballer has played more times for Ireland?
Sky Sports presenter explains why Roy Keane and Graeme Souness are so critical of players
Eddie Jones shares great tale on hour-long chat with 'inspirational' Roy Keane
You may also like
4 days ago
"That is not a penalty. Never in a million years" - Liverpool steeped with controversial VAR call
4 days ago
"I'm a bit wary of saying they've gone sloppy in case Klopp comes after me!" - Roy Keane
6 days ago
"I saw a skinny boy from Ireland, standing in a big goal" - Jurgen Klopp praises Caoimhín Kelleher's development as a goalkeeper
1 week ago
"I don't buy into this 'he never had the best time at Barcelona'" - Steven Gerrard defends Philippe Coutinho's spell at Barca
1 week ago
Liverpool 'not prepared' to meet Mohamed Salah wage demands
2 weeks ago
Jurgen Klopp clarifies Liverpool's 'false positive' Covid results before Arsenal postponement
Next Page