Commentating for BBC, Alex Scott was unsparing in her criticism of the Ireland international.

Newcastle United looked to be cruising to a much-needed league win over Southampton when Jeff Hendrick was sent off less than a minute after the Saints had pulled a goal back through James Ward-Prowse.

Steve Bruce's side began the afternoon 16th in the league and in search of three points that could see them focusing on mid-table consolidation, rather than looking nervously back over their shoulders.

END_OF_DOCUMENT_TOKEN_TO_BE_REPLACED

They went 2-0 up through Arsenal loanee Joe Willock and Almiron before Takumi Minamino, himself on loan from Liverpool, grabbed a goal back for Southampton. However, when Almiron scored another, deep in stoppage time at the end of the first half, the hosts looked well set.

After shipping nine against Manchester United, on Tuesday, the Saints had conceded 12 goals in a game and a half of football. They needed a spark to give them hope, and Ward Prowse provided it with a superb free-kick.

That made it 3-2 and Bruce would have been fuming when Hendrick picked up his second yellow card of the match for pulling back Minamino. 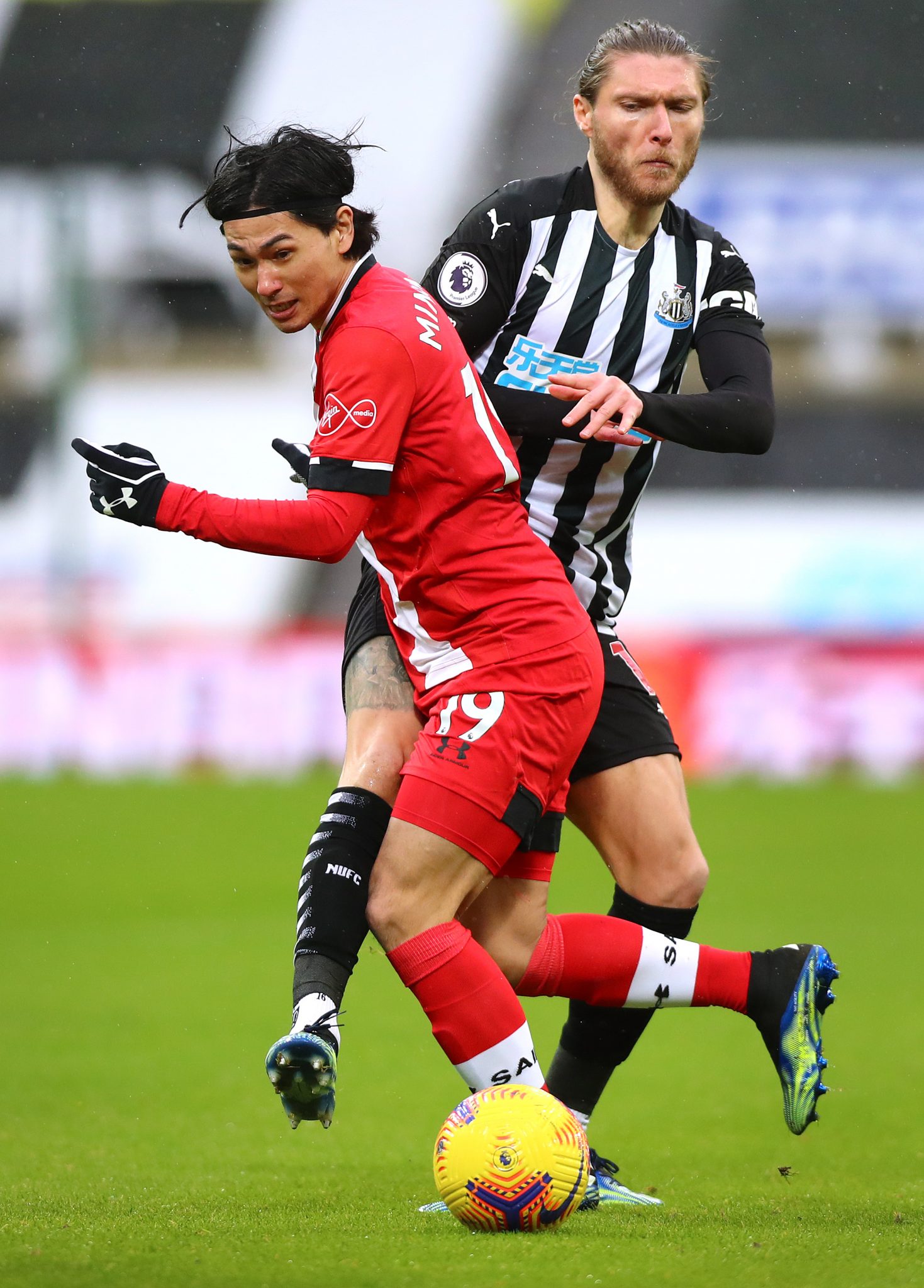 END_OF_DOCUMENT_TOKEN_TO_BE_REPLACED

There was initial confusion as referee Craig Pawson yellow-carded the wrong player but, once that was cleared up, the Ireland star was given his marching orders. It left his side a man short for the final 40 minutes of the game. Over on the BBC's Final Score show, Scott declared:

"It's stupid. he doesn't even need to pull Takumi Minamino back there. He's not through on goal, there's no reason for him to do what he just did. If they go on to lose the game, Jeff Hendrick needs to take responsibility."

As Southampton pressed for an equaliser - with Nathan Redmond hitting the crossbar and Che Adams having a goal chalked off - there would have been quite a few Toon supporters agreeing with Scott, the former Arsenal and England defender.

END_OF_DOCUMENT_TOKEN_TO_BE_REPLACED

Newcastle were down to nine min for the hectic final stages as Fabien Schar was stretchered off, and all the substitutes were used up. Danny Ings then went close to making it 3-3 but Isaac Hayden cleared his low drive off the line.

Ralph Hasenhuttl's men could not find that elusive equaliser, Newcastle held on and Jeff Hendrick will surely be the most relieved of all.


popular
Kieran McGeeney on the defensive after post-match questions on brawl
Damien Comer targeted in brutal, chaotic Armagh and Galway brawl
Conor Gleeson's gesture to heartbroken Ethan Rafferty a tonic after sideline brawl
Shane McGuigan does a 'Sueey' Cristiano Ronaldo would be proud of after winning MOTM
Roy Keane makes good on bet after seeing Cork fall to Dublin
"That bit of a fracas nearly woke us back up again" - McDaid never doubted his boys in the shoot-out
QUIZ: Name every club to play in the Champions League
You may also like
5 days ago
Josip Juranovic may depart Celtic as Premier League clubs chase transfer
5 days ago
Rio Ferdinand on the four Man United players who could be sold this transfer window
6 days ago
Glenn Whelan highlights Rory Delap's importance under 'Pulis-ball' at Stoke City
6 days ago
Burnley name their price for Nathan Collins with two Premier League clubs interested
1 week ago
Chelsea ready to 'make move' for Raheem Sterling
1 week ago
Investigation launched into Granit Xhaka booking after huge bet placed
Next Page