A very tidy win for Japan.

Japan supporters in Qatar have been pictured picking up rubbish after their side's remarkable win over Germany on Wednesday.

In their opening game of the World Cup, Japan beat four-time champions Germany 1-0 in arguably the biggest result of their footballing history.

But despite the huge upset and jubilant celebrations, their fans still found time to clean up litter in the stands after full-time.

Supporters in football shirts were seen armed with bottles and blue waste bags as they tidied up the stadium. 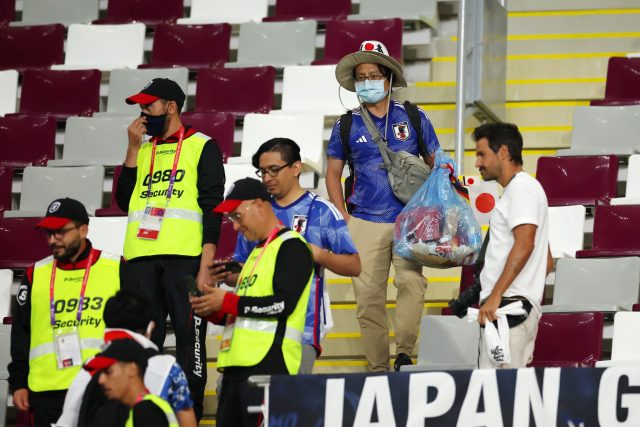 All of the fans clutched numerous bags to collect the rubbish and weaved through each row to make sure the stadium was tidy.

END_OF_DOCUMENT_TOKEN_TO_BE_REPLACED

Another image showed security officials standing next to the supporters as they tidied up, with many of them appearing to smile.

Even though this was Japan's first game at the tournament, this isn't the first time their fans have helped with the clean-up operation at the World Cup.

Japan fans were spotted cleaning litter up after the opening game of the World Cup between Qatar and Ecuador on Sunday. 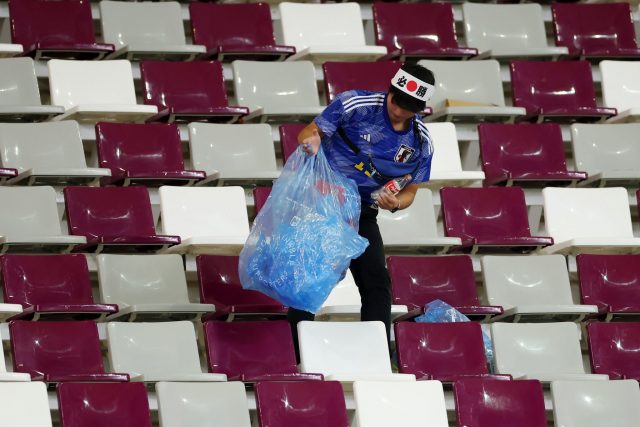 END_OF_DOCUMENT_TOKEN_TO_BE_REPLACED

Footage of the clean-up crew shows them going row to row picking up discarded food and drink containers and placing them into plastic bags.

The video was taken by influencer Omar Al-Farooq from Bahrain who shared it on Instagram.

In the footage, Omar is heard asking the group: "Why are you doing this?"

One of the volunteer cleaners replies: "We are Japanese, and we do not leave rubbish behind us, and we respect the place." 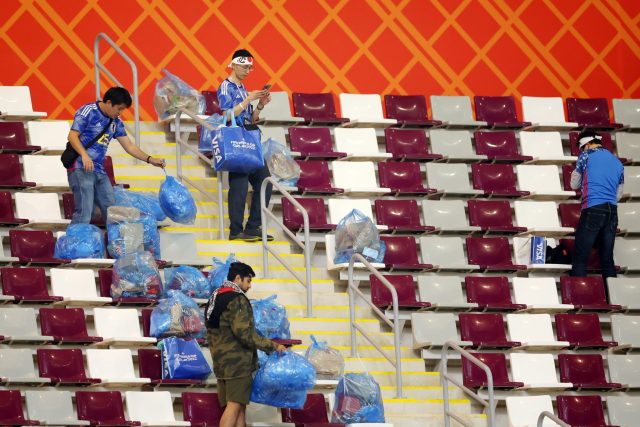 The supporters also picked up flags which had been thrown by the Qatari and Ecuadorian fans, saying the symbols "command respect".

It's a tradition that Japanese football fans have become known for. They won the hearts of fans all over the world at the 2018 World Cup in Russia when, despite a heartbreaking 3-2 knockout loss to Belgium, the 'Samurai Blue' supporters sifted through the aisles of the Rostov Arena to pick up discarded litter.

Headlines were also made before the Germany v Japan game as well as after it, with the German players protesting against FIFA's decision to ban the One Love armbands by covering their mouths for the team photo before the game.


popular
Rory McIlroy explains 'falling out' with Shane Lowry that lasted a few years
World Cup Power Rankings: The top eight pundits of the tournament so far
Talksport presenter puts Martin O'Neill to the pin of his collar over Declan Rice and Jack Grealish
'I just became obsessed with football' - Cruciate curse actually a blessing for Sheehan
Ariel Helwani shares Paddy Pimblett WhatsApp messages as spat becomes public
World Cup Power Rankings: The top 10 players at the tournament ahead of the quarter-finals
Roy Keane scores winning goal past Micah Richards in ITV v BBC pundits match
You may also like
1 day ago
Cristiano Ronaldo's sister blasts Portugal boss' decision to start forward on the bench
4 days ago
The full player ratings as England beat Senegal to set up quarter final against France
4 days ago
Arsene Wenger claims teams who focused on politics at World Cup did worse
6 days ago
The SportsJOE Friday Pub quiz: Week 3
3 days ago
France fail in bid to change result of group match
3 days ago
England fan shouts 'Free Palestine' while live on Israeli TV
Next Page