"Give it Keane until the end of the season!"

Jamie Redknapp, Micah Richards and Robbie Keane have joked that Roy Keane and Gary Neville could take over as manager and assistant manager at Manchester United.

END_OF_DOCUMENT_TOKEN_TO_BE_REPLACED

United - who have won just one of their last seven Premier League fixtures - slipped to eighth position after the weekend's results, with the club's recent run of poor results and disappointing performances proving to be a step too far for the Norwegian.

When the trio were asked who the Red Devils should appoint, both on an interim basis and a permanent one in the summer, they took a comical approach to the question. One wonders would they would have been so bold if Keane was on punditry duty today.

They joked that fellow Sky Sports pundits and former United players Neville and Keane should take the reins at Old Trafford.

Richards replied: "Give it Keane until the end of the season!"

It was then down to Redknapp to chip-in. With a wide grin, he remarked: "Roy Keane and Gary Neville as his assistant, that would be the dream, wouldn't it?"

Robbie 🗣 "Roy Keane will sort it out"

Micah 🗣 "I'm not saying he couldn't do it, but the relationship with the players, he's slagged off half the dressing room." 🤣 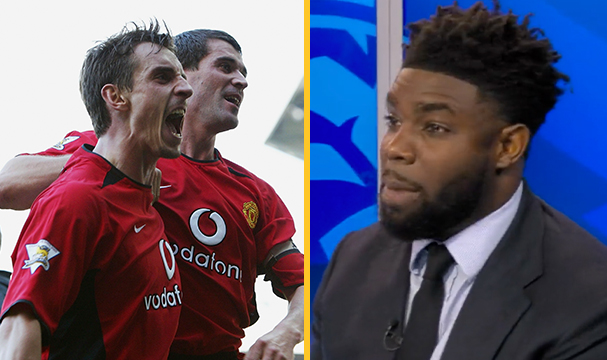 Roy Keane has 'slagged off half the dressing room'

END_OF_DOCUMENT_TOKEN_TO_BE_REPLACED

"No that would not be the dream," joked the ex-Man City defender, who has formed an unlikely on-screen partnership with Keane in recent months.

When asked if United need somebody like Keane in charge, Richards responded: "I mean, probably not as this time.

"I think Roy Keane will be a great manager, and I'm not saying he couldn't do it, but I'm talking about the relationship with the players - he's slagged off half of the dressing room."

"It doesn't matter, I think it was all of the dressing room!" said Jamie Redknapp.

END_OF_DOCUMENT_TOKEN_TO_BE_REPLACED

United announced that Michael Carrick had been named caretaker boss until the Red Devils appoint an interim manager for the remainder of the season.

While it is highly unlikely - most like impossible - that Neville and Keane will find themselves in the Old Trafford hot-seat, it would certainly make for box-office television if nothing else.


popular
Nigel Owens on most annoying players to referee (three of them are Irish)
Six All Blacks but no Ireland players in world's top 20 list headed by Antoine Dupont
"I asked one question and lads slagged the arse off me!" - Johnny Sexton on Roy Keane chat
Seamus Coleman gives brilliant post-match interview after Everton beat Arsenal
Tadhg Furlong gets some love as 2021 'Best XV' debate sparked
"My thoughts were with him initially and that's why I got emotional" - Mulcahy still the man for Kilmallock
"Women's rugby deserves better and he's not the man for the job"

You may also like
1 day ago
"I asked one question and lads slagged the arse off me!" - Johnny Sexton on Roy Keane chat
3 days ago
Divock Origi reveals what Jurgen Klopp said to him before scoring crucial winner
3 days ago
Antonio Cassano reveals Cristiano Ronaldo text messages after TV criticism
3 days ago
Roy Keane defends Stoke and Blackburn despite nasty fan comments
3 days ago
Divock Origi to the rescue after Diogo Jota's absolutely incredible miss
3 days ago
Ayr United goalkeeper banned for throwing toilet roll at rival fans
Next Page