James Rodriguez was vital in saving the life of Ousmane Coulibaly, who suffered a cardiac arrest during the game.

James Rodriguez helped perform a heroic act to save the life of Ousmane Coulibaly after he suffered a cardiac arrest during a league match in Qatar.

Rodriguez was playing for Al-Rayyan against Al-Wakrah in the Qatari Stars League on Monday when Coulibaly was spotted collapsing in the goalmouth during the first-half.

The Colombia international proceeded to run over in aid where he was spotted helping to adjust the head of the 32-year-old, allowing him to be able to breathe before medics rushed onto the scene to continue treatment.

JAMES RODRÍGUEZ 🇨🇴 IS A HERO!

The Colombian player was vital in saving the life of Ousmane Coulbaly, who suffered a cardiac arrest during a game! 🚨

James helped by adjusting his rival’s head so that he could breathe properly, according to doctors. 👏👏 pic.twitter.com/qoI0cfwWeC

Coulibaly was then taken to hospital before the club released a short statement confirming that he was in a "stable" condition.

They said, as per Reuters: "Thank you for your messages of support and love, Ousmane is in stable condition due to his heart attack, he regains consciousness slowly but surely.

"He is in very good hands. Al hamdoulilah. Many thanks to God and the doctor who saved my husband's life! Thank you for all the staff and the team of Al Wakrah SC.

"I appreciate all you did for us. Let's continue to pray." 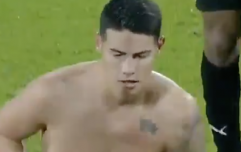 END_OF_DOCUMENT_TOKEN_TO_BE_REPLACED

Meanwhile, the league also released a statement saying: "The Qatar Stars League wishes the player a fast recovery, and we would like to thank the medical staff of both teams, paramedics and doctors for their great efforts during such events."

The game, which was played last weekend, was abandoned and rescheduled to the following day in which Al-Rayyan won 3-0 - including two goals from James Rodriguez to keep them eighth in the table.