Here we are now, in a European Championship playoff, with Stephen Kenny as manager.

When Ireland were being hammered by Wales and failing to score against Denmark to qualify for this playoff via the trusty route of coming bottom of their Nations League group (don't ask), you'd never thought we'd be here.

Not with that form, not with John Delaney announcing that Mick McCarthy was taking over for this campaign, and not with the world shutting down since.

But, lads, listen. We are here. Stephen Kenny is here. And as the luck keeps piling up (on the football front obviously), no fans are there so the two away games that Ireland have to win are a little less daunting looking now.

They do, however, have to win them and winning big games isn't always something that has come naturally to this national team. Now, they must win two big games and two away games and a 1-1 won't be enough - not without penalties.

The last time Ireland played an away game in a Euro playoff, Robbie Brady did something special that looked like this pic.twitter.com/G5P52ZnnPr

Let's be clear though, if this obstacle isn't scaled, there won't be any second day out. The winner advances to play Bosnia or Northern Ireland and the loser can forget about Euro 2020, in 2021.

Stephen Kenny hasn't suddenly lost his nerve or identity though and called about three solid defensive midfielders to sit in front of the back line. No, he's named an exciting team to take the game to the Slovaks and he has sprang one surprise with the inclusion of James McClean. 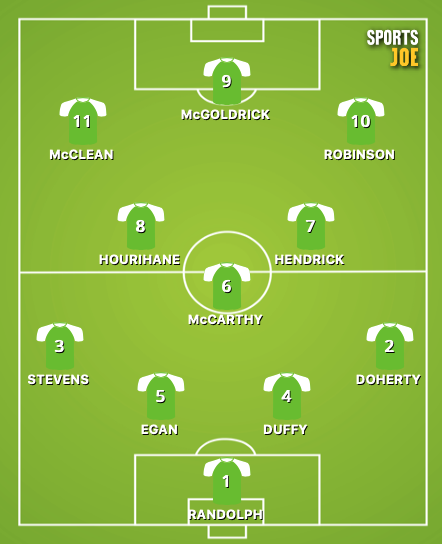 That leaves some exciting options on the bench including:

That bench has grown suddenly weaker with the news that both Aaron Connolly or Adam Idah are out of the squad.

Neither Stephen Kenny nor the FAI (in their statement) elaborated but a second member of the Irish backroom team has tested positive for Covid-19.

This is it, folks. Go well.


popular
"It is very easy to put a nail in a fella’s coffin and kick a fella when he is down" - Ted Walsh
Ugo Monye's Lions XV features two Ireland players and Welsh captain
"When Sean Boylan was around, you didn’t need a psychologist or a counsellor - he did it all himself"
QUIZ: How well do you remember the 2010 World Cup?
Ruby Walsh "angry and embarrassed" as Elliott apologises for "moment of madness"
"There would be a boot in the sink, a dish there, a toothbrush under the bed!"
The SportsJOE 12 o'clock quiz | Day 311
You may also like
2 weeks ago
When Roy Keane rinsed Mick McCarthy with the mother of all comebacks on first Ireland trip
1 month ago
QUIZ: You'll need to be a massive Ireland fan to get all these one-cap wonders
3 months ago
FAI investigating Ireland England video as "a matter of urgency"
3 months ago
Full player ratings as Ireland fall to another defeat in Wales
3 months ago
Matt Doherty awarded man of the match playing left back, says he has no problem playing there
3 months ago
Kevin Doyle easily sums up the difference between England and Ireland
Next Page