James McClean's tenure at West Bromwich Albion appears to be coming to an end.

111 appearances and three years later, James McClean looks like he's leaving West Brom. The 29-year-old played 30 times for Albion last season, finding the net once. His efforts were unable to prevent the club from finishing dead last in the Premier League.

Now, he is being linked with a move to another club that was relegated to the Championship this season. McClean is 1/3 on to join Stoke City, according to a report from Birmingham Live. 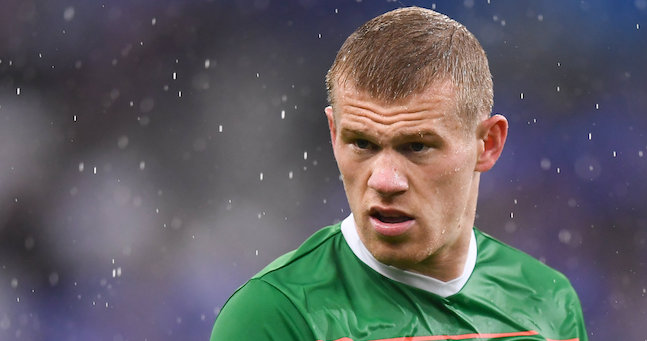 END_OF_DOCUMENT_TOKEN_TO_BE_REPLACED

What gives this rumour more credibility than most is the fact that Stoke boss Gary Rowett is clearly a fan of McClean. Initially, reports began circulating that Rowlett tabled a €6.8 million offer for the winger in the January transfer window. However, it is understood that these reports weren't exactly accurate.

It was confirmed though that he tried to sign the Derry native on loan for Derby County at the start of the year. The bid was ultimately rejected by West Bromwich Albion.

END_OF_DOCUMENT_TOKEN_TO_BE_REPLACED

It's difficult to know what to make of this potential move. On the one hand, he has a better chance of getting promoted with Stoke City than with West Brom. He is also likely to get an improved deal and a multi-year contract if he makes the switch.

Also, newly-promoted Cardiff City, who were also linked with a move for McClean just snapped up 23-year-old winger Josh Murphy from Norwich City for €12.5 million.

The bad side of the move is that it's a move to the Championship. While McClean may want to wait to see if a Premier League outfit comes sniffing around, there is no guaranteed interest from the English top flight.

According to the report, McClean is 10/1 to sign for Scottish champions Celtic. Last month, he told Celtic TV,

"If it was up to me it would have happened a long time ago."


popular
Clive Woodward happy to 'eat humble pie' after bold comments about Ireland
Man United could be blocked from playing in the Champions League next season
Man City expect Pep Guardiola to leave
"He rode him like a machine rather than a racehorse" - Mullins doesn't spare Townend as second string come good
The Ireland team Andy Farrell needs to start when France come to town
Josh van der Flier's post-match recovery routine could spark a bracing trend
Matt Williams wants two changes and Peter O'Mahony benched for Ireland vs. France
You may also like
1 month ago
Evan Ferguson praised after Brighton striker matches feat by Premier League legend
1 month ago
Evan Ferguson: All you need to know about Ireland's newest striker
1 month ago
Roy Keane cracks ice cold Ireland joke after France lose World Cup final to Argentina
1 month ago
Ireland reportedly line up Lee Carsley as next national team manager
1 month ago
Talksport presenter puts Martin O'Neill to the pin of his collar over Declan Rice and Jack Grealish
2 months ago
UEFA fine FAI €20,000 for Ireland dressing room song
Next Page