Maddison's goal for Leicester was ruled out for a foul in the build-up.

Leicester City's James Maddison took aim at Raphael Varane after seeing his goal disallowed for a foul on the defender during the 1-1 draw with Manchester United on Saturday.

United turned in another lacklustre performance at Old Trafford and fell behind to Kelechi Iheanacho's second half header. Fred quickly equalised for Ralf Rangnick's side, only for Maddison to seemingly re-establish Leicester's lead in the closing stages of the game.

The goal was, however, struck off after intervention from VAR. 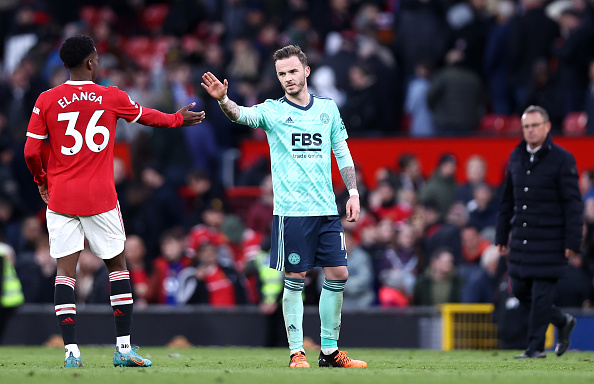 'As soon as the referee went to the monitor I knew something was going to happen.'

Replays show that Iheanacho did catch Varane's leg when trying to retrieve the ball on the edge of the area, before laying it on a plate for Maddison to score.

The Foxes' number told Sky Sports after the game that he believed the Frenchman went down too easily.

"I think the referee should maybe probably give a foul in normal time to be fair, maybe," said Maddison.

END_OF_DOCUMENT_TOKEN_TO_BE_REPLACED

"I’m obviously going to be biased and say it’s not a foul. As soon as he goes over to the monitor you know.

"I saw Varane go down. The way he went down… I’m not sure how he went down like that from the actual foul that was given.

The way he went down I thought it was some sort of twist injury without a foul taking place. As soon as the referee went to the monitor I knew something was going to happen that was going to spoil my party."

"It was a great feeling for about three minutes" 🙄

James Maddison on VAR ruling out his winner for Leicester City vs Man Utd at Old Trafford... pic.twitter.com/CragJh3MnL

'I felt we were in control. We were actually the better team.'

Maddison also felt that Leicester deserved more than just a point and that they were in control of the game.

The performance was good," he added. "We stamped our authority and we come away a little disappointed that we didn’t get three points. We could have got more from the game.

"They scored so quickly after us, which got Old Trafford bouncing again and got them pushing as the home team.

"I thought we were dominant in the first half. Sometimes you can almost feel in control even without the ball.

"They obviously played with Bruno and Pogba without a recognised striker. They’ve got tricky players in wide areas, but I felt we were in control. We were actually the better team."

United remain is sixth and three points behind fourth-placed Arsenal, who have two games in hand on Rangnick's side, while Leicester are ninth in the Premier League.