"Tell you what, Jadon Sancho would be an unbelievable player for Liverpool"

"Hold on Chappers, I thought you were Man City!"

Jadon Sancho has now hit his groove at Manchester United, but Jonathan Woodgate allowed himself to picture a move that, in his opinion, would really set the England star off.

Woodgate was jokingly told his Match of the Day 2 punditry appearance was in danger of eclipsing his Real Madrid debut for infamy and talking points.

END_OF_DOCUMENT_TOKEN_TO_BE_REPLACED

The former England defender, who was managing Bournemouth in the Championship last season, famously scored an own goal and was sent off on his Madrid debut. On Sunday night, Mark Chapman likened some of his punditry comments to that Madrid debut, prompted by Woodgate revealing the MOTD2 host was fond of Pep Guardiola's City.

One of the most interesting observations Woodgate made, aside from savaging Leeds' woeful set-piece defending against Manchester United, was about Sancho, and a club that may suit him even better than the 20-time league champions. 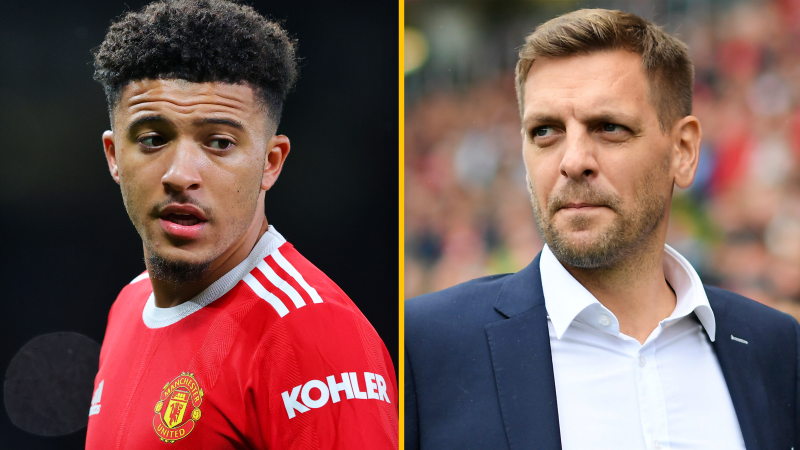 Jadon Sancho would be "unbelievable" for Liverpool, says Woodgate

END_OF_DOCUMENT_TOKEN_TO_BE_REPLACED

Signed by Manchester United after a pursuit that stretched the best part of two years, Jadon Sancho then found himself on the fringes - under Ole Gunnar Solskjaer - for the first half of the season. With Anthony Martial loaned out and Marcus Rashford not at peak form, interim United manager Ralf Rangnick has given Sancho more opportunities.

The 21-year-old has made seven starts since the end of December, scoring twice, assisting for two more goals and netting twice more for strikes that were then credited as own goals. Against Leeds United, on Sunday, he set up goals for Bruno Fernandes and Fred in a 4-2 win.

Speaking in depth about Sancho, on MOTD2, Woodgate commented:

"You need that time to settle in," he added. "At Manchester United, it hasn’t been great at the minute. Tell you what, he would be an unbelievable player for Liverpool. He would fit into their system perfectly."

END_OF_DOCUMENT_TOKEN_TO_BE_REPLACED

Liverpool signed attacker Luis Diaz from Porto for £40m during the January transfer window, so their options up front look rosy.

One could see where Woodgate was coming from as Liverpool play with such crispness and speed in attack that someone like Sancho would enjoy himself there. Manchester United supporters, though, will not have enjoyed hearing how one of their best attacking talents would be better suited down the road, in Merseyside.