The transfer is expected to be completed before the end of the week.

Jadon Sancho is set to become one of the Premier League's top earners once his imminent transfer to Manchester United goes through.

Sancho's representatives expect the 20-year-old to be a Manchester United player by the end of the week, with the final details of the transfer being ironed out. The transfer fee is expected to be divided into three instalments and will total €120m - a fee Borussia Dortmund feel they would not be able to command next summer, as they expect the market to deflate.

We have the return of the Bundesliga today and Jadon Sancho will be centre of attention 😍 pic.twitter.com/tgeIuyDmtx

On top of that, German sports newspaper Sport Bild are now reporting that a five-year contract worth €17.6m a year has been agreed between the Sancho and United. 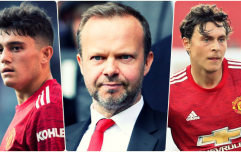 END_OF_DOCUMENT_TOKEN_TO_BE_REPLACED

Going by the current conversion rate, that equates to just under £16m a year, and would see Sancho earn a gross income of £305,000 per week before tax.

Sancho would be one of the best players in the Premier League on this wage at the tender age of 20 but given his meteoric rise over the past two years, the goals and assists numbers he is already putting up and the potential he has to become one of the best forwards in the world, it seems like a worthwhile investment.

It's also worth noting that Alexis Sanchez, who earned even more than Sancho will at United, has agreed a move to Inter Milan, bringing his nightmare spell at Old Trafford to a close. United will not receive a fee for the Chilean but will be much more content spending that money on Sancho's wages, rather than subsidising his wage at Inter.

popular
"My job at Sky is not to be a cheerleader for Rory McIlroy" - Paul McGinley
QUIZ: Can you guess the football shirt sponsors of these classic 90s kits?
QUIZ: Identify the football club from these 12 crests
"He's found a way to do it. Whether that's good or bad for the game, I don't know"
Sam Bennett's green jersey masterclass got Lance Armstrong talking
The SportsJOE 12 o'clock quiz | Day 187
Only old-school fans will get 20/20 in this 1990s footballers quiz | Part 2
You may also like
2 days ago
Alex Telles 'hopeful' of becoming a Man United player imminently
2 days ago
Rio Ferdinand story about Dwight Yorke conversation shows Alex Ferguson's ruthless streak
4 days ago
Luke Shaw steps up to make common sense plea to Ed Woodward
5 days ago
Ed Woodward explains Manchester United's lack of transfer activity
1 week ago
QUIZ: Can you name the 5 Man United players in 15 seconds?
1 week ago
Man United beaten to Sergio Reguilon
Next Page