"I was desperate for one."

It's been almost two months since England's heartbreaking loss in the final of Euro 2020, and in ways feels like even longer ago. But the pain of coming so close to glory and falling at the final hurdle is still there for Gareth Southgate's team.

The penalty shoot-out loss, in which Marcus Rashford, Jadon Sancho and Bukayo Saka failed to score at the crucial moment, provoked a lot of finger pointing among fans. Why didn't Raheem Sterling take one? Why didn't Jack Grealish take one? Why did Southgate make Saka take on? 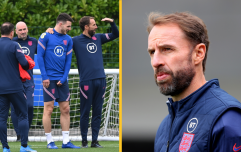 END_OF_DOCUMENT_TOKEN_TO_BE_REPLACED

The answers, at the time, remained private. The team had a plan and there will always be a factor of 'what if' if you lose, whether it comes down to a spot kick or not. But since that fateful day at Wembley in July, England star Jack Grealish has spoken about their feelings at the time, and the truth behind the penalty order.

He first addressed accusations of cowering away from the responsibility in the immediate aftermath of the defeat, correcting Roy Keane's assertion that he should be stepping up to take one with a tweet that read: "I said I wanted to take one!!!! The gaffer has made so many right decisions through this tournament and he did tonight! But I won’t have people say that I didn’t want to take a peno when I said I will…"

I said I wanted to take one!!!!
The gaffer has made so many right decisions through this tournament and he did tonight! But I won’t have people say that I didn’t want to take a peno when I said I will… https://t.co/3mBpKyMoUV

And the topic unsurprisingly came up once again when the Manchester City midfielder spoke to ITV ahead of England's qualifier against Hungary, explaining that he was down to take the sixth penalty in the shootout, had it got that far.

Asked by Gabriel Clarke whether he had watched the shootout back, Grealish replied: "No." 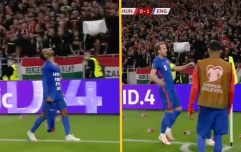 END_OF_DOCUMENT_TOKEN_TO_BE_REPLACED

"[Watching the shootout from the halfway line was] nerve-wracking really. When you're not playing, or you're not involved, or you're watching on, it's always more nervous," he said.

Clarke then asked which penalty he was going to take, to which Grealish responded: "Sixth, so the next one."

He went on to say that "of course" he wanted to take one of the first five.

"I was desperate for one. But you've got to remember that we practised it every single day for however long we were here, 6, 7 weeks.

"You have to respect the manager's decision, and the staff's decision to pick the five that they want.

"I'm not going to sit here and say I didn't want one, because I did, but at the end of the day, it's one of them." 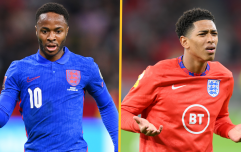 END_OF_DOCUMENT_TOKEN_TO_BE_REPLACED

Looking ahead to the Qatar World Cup, set to take place in 15 months' time, Grealish said: "Everything that happened in the summer will make us stronger.

"As a team and as a group of lads, sometimes you have to experience failure to improve. I'm sure we will."


popular
Galway fans' frosty reception for Davy Fitz doesn't make any sense
The most Stone Age tackle you've ever seen gets South African lock straight red card
'Brian was a genius... he would've killed you to even win a game of touch'
"Johnno went, 'We’re not moving! You're trying to mess us about!'" - Ben Kay recalls red carpet controversy
Ryan Manning hacked to the ground by Henri Lansbury in ruthless assault
Wallabies star bounces off Duane Vermeulen like a brick wall, gets yellow-carded
Final question of Ryder Cup press conference has Team USA in all sorts of trouble
You may also like
2 months ago
Jadon Sancho writes emotional first statement since England's Euros defeat
2 months ago
England fans try to storm into Wembley without tickets before Euro 2020 final
2 months ago
The absolute state of Leicester Square as England fans tear it up
2 months ago
Kieran Trippier set to start for England in Euro 2020 final
2 months ago
"Whoever they are, they're an idiot, him or her" - Even English media disgusted by laser
2 months ago
Luke Shaw offers humble response to praise from Roberto Carlos
Next Page