What a gem of a goal.

Aston Villa are clinging onto their Championship playoff hopes but absolutely leathering Derby County will do their chances no harm at all.

Villa are down in mid-table after another indifferent season but they stayed in touch with the top six by playing Frank Lampard's Derby off the (Villa) park. 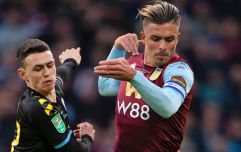 END_OF_DOCUMENT_TOKEN_TO_BE_REPLACED

Irish midfielder Conor Hourihane scored a first-half brace and Tammy Abraham found the net but all the talk was about a stunning first 45 from Jack Grealish.

The former Ireland underage star, who later opted to represent England, found Abraham with a sublime chip over the Derby defence, after nine minutes, and the forward squared for Hourihane to slot home.

Abraham made it 2-0 before getting his second assist of the half, for Hourihane again, and the visitors were flailing.

Any hopes they had of regrouping at half-time and trying to salvage something from the game were ended by the stonking Grealish finish in injury time. Villa had a corner kick over on the left and, in a pre-rehearsed move, Glenn Whelan lofted a cross that sat up and begged to be hit.

Grealish struck it perfectly and the volley was reminiscent of the Paul Scholes dinger at the same end of Villa Park in 2006.

Grealish was in good form for Villa - two goals and three assists in six games - before injury saw him miss eight weeks of action.

It is little surprise that his return has resulted in an upturn in Villa's fortunes.


popular
Paul O'Donovan busts the cliches and leaves the mystery behind him in one more emphatic interview
Ireland's rowing heroes on what everyone was shouting as they beat Team GB to bronze
Next time someone doesn't cut you slack for commuting to training, show them Joe Canning's words
Warren Gatland with great response after being asked if he'll set up Twitter account
Rory McIlroy's true allegiance summed up in one text message to Justin Rose
"Ah I suppose it's fine" - Paul O'Donovan and Fintan McCarthy are Olympic gold medallists
Seán O'Brien lauds "unbelievable" Maro Itoje as Irish fan makes confession
You may also like
6 months ago
Aston Villa ask Premier League to postpone game with Everton
6 months ago
Louie Barry on Fabinho's sound post-match gesture after jersey swap mix-up
7 months ago
Jack Grealish throws dummy with his car to escape media at court
7 months ago
Jack Grealish: 'Embarrassing' VAR is 'ruining the game'
9 months ago
"What a footballer" - Klopp lauds Jack Grealish after Liverpool thumping
1 year ago
Conor Hourihane sticks it to fan after making Premier League debut
Next Page