Jack Byrne wants the ball. He's mad for the ball.

He stretches the arms wide and lets out a roar.

You don't have an option really. You just have to give it to him because he's already sizing you up. He's already angling towards the goals.

They say the best players look like they have all day on the ball but that's no coincidence. They take a look around, weigh it all up and like a space invader in its element, they sniff it out and then they hunt it down.

It's an easy game really. All you have to do is give it to him.

With a slick touch and a roll, he's away and within a stride he has the head up and the freedom of the park. That's Jack Byrne for you. That's what he can offer an Ireland team who let's be honest, have been lacking creativity and guile for years. There's a place for him in that engine room.

First few minutes against New Zealand and Jack Byrne was a cut above the rest. The ball drifted around like a magnet to his right leg - that's no coincidence either - as he did what he's been doing in a Shamrock Rovers jersey all year.

Demand and move. Head up and lash it on. 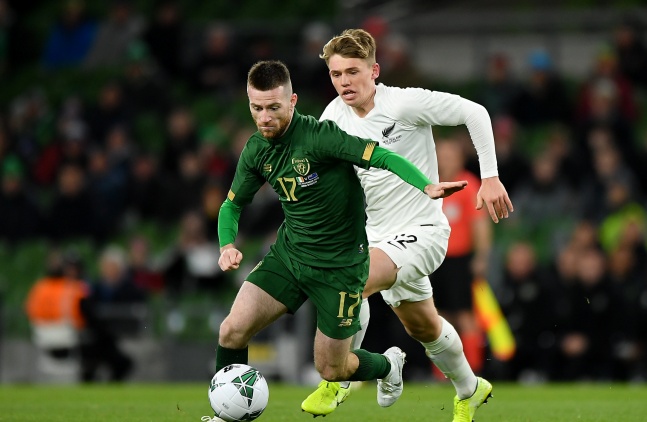 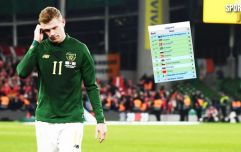 The teams Ireland could face in the Euro 2020 playoffs

END_OF_DOCUMENT_TOKEN_TO_BE_REPLACED

The first touch is deft and the pass is usually inventive. You won't see this fella passing the ball backwards. In fact, he had 34 passes in the New Zealand half in the first 45 minutes. That was more than any other player on the pitch.

For once, you actually felt Ireland had a little bit of control over a game. It sure was a pleasant change from the slapdash game of pinball we're used to seeing around the midfield.

It meant a lot to the lads around the pitch too. Up top, Troy Parrott and Seani Maguire were feeding off the passes and breaks. At least they had something to work with.

Byrne was less influential in the second half and was taken off after 62 minutes but you'd hope Mick McCarthy made that decision with a view to some involvement for Monday's big one against Denmark. God knows he'd make a difference.

And so would a few others. New Zealand took the lead early on but for once, you felt Ireland were going to have the final say. Up front, Seani Maguire was making inroads and showing lively. He really zipped into it in the second half and his peach of a goal will surely put him in the shop window for Monday.

Form is everything. This fella is playing with confidence.

Seani Maguire with the absolute filth 🔥

Oh yes lads this is the Ireland we want to seepic.twitter.com/0i9HD9Rv0I

Others to impress include Troy Parrott - who despite not scoring, dazzles with elegance. Lee O'Connor made an impressive senior debut down the right flank and his cross for Callum Robinson's goal was worth watching again.

Young O'Connor of Waterford and he bending it like Beckham ☄️pic.twitter.com/FJ0mbRNq4z

There's hope for us yet. We just need to give these lads a chance.

popular
The SportsJOE 12 o'clock quiz | Day 146
After a bonkers final frame, a shaken Kyren Wilson makes it to the world final
Leinster star Hugo Keenan has beaten Beauden Barrett's 'Bronco' time
"No doubt he'll say he played shit like he normally does, but I thought it was a good game."
The SportsJOE 12 o'clock quiz | Day 145
QUIZ: Beat the clock to name the Premier League assist kings
The Champions League has changed its substitute rules for next season
You may also like
8 months ago
"I still think it will have zero impact on Monday, it'll be a totally different 10/11 that lines out"
9 months ago
"He just needs to stay grounded, keep learning, and he will be fine"
10 months ago
Aaron Connolly extremely hard on himself after 'gutting' missed chances
1 week ago
Arsenal announce redundancies following Covid-19 downturn
1 week ago
The SportsJOE 12 o'clock quiz | Day 137
1 week ago
Jadon Sancho to earn eye-watering salary at Manchester United
Next Page