Mick McCarthy and Terry Connors will have surely filled a notepad (or three) at Tallaght Stadium tonight.

Shamrock Rovers are top of the SSE Airtricity League after coming from 2-1 down to beat the champions 3-2 in a thrilling encounter played out in steady rain in front of a rapt audience. Jordan Flores scored a Puskas-Award-nominee-in-waiting but Jack Burne settled the tie with a tasty finish of his own.

Every one of the 7,522 fans in attendance at Tallaght Stadium were treated to a cracking encounter with two of the finest goals you will see anywhere in the footballing world this weekend.

Dylan Watts opened the scoring for Rovers after 20 minutes but Dundalk drew level with a sensational volley from Jordan Flores. He extended his left peg to dispatch a glorious volley and temporarily silence the home crowd.

What a goal, Jordan Flores 🤯🤯pic.twitter.com/VrXUC04EQt

Patrick Hoban put Dundalk 2-1 ahead after 63 minutes but Stephen Bradley's side would not be denied and they stormed back into the match.

Jack Byrne's corner kick, eight minutes later, found the head of Ricardo Lopes and the game was back in the mixer at 2-2. Given the enthralling game that had already played out, it would take something special to settle this tie.

On 83 minutes, up stepped Byrne. He stepped Chris Shields outside the Dundalk box and curled home a beauty from 25 yards out.

Jack flippin' Byrne is at it again!! 🤤🤤pic.twitter.com/fy3QCbBSeu 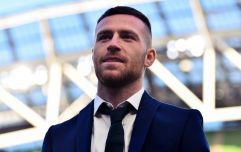 "When I came here, I was dead and buried. There was no way back for me"

END_OF_DOCUMENT_TOKEN_TO_BE_REPLACED

Rovers held on to claim the victory that sees them extend their league lead, over Dundalk and the chasing pack, to three points.

"Yeah, Dundalk are the champions for a reason. They're a top side.

"I played with Jordan at Wigan and I know how good he is. He's an unbelievable footballer, so I was seeing trouble when the ball dropped to him at the edge of the box.

"I can't say much about the strike; we couldn't have done much about it. It was just one of those things."


popular
Michael Bisping tears into Dillon Danis for 'trying to be Conor McGregor so hard'
"We did find him hours later and we made up." - How Flynn and his best friend came to blows in Croke Park
The top 10 fastest knockouts in UFC history
The SportsJOE 12 o'clock quiz | Day 333
"Munster was like playing for your local GAA club. The craic was 90"
"Twas often I felt like firing a boot at him' - Micko's words of consolation didn't go down well in Cork
Six months after Michael Venom Page's flying knee fractured his skull, Evangelista Santos retires
You may also like
1 year ago
John Caulfield parts ways with Cork City
2 years ago
Bohemians launch class new away jersey made by O'Neills
2 years ago
James McClean speaks superbly about former teammate Ryan McBride on punditry debut
2 years ago
League of Ireland star Kieran Sadlier scores goal from inside his own box
3 years ago
Bohemians rock Rovers with 98th minute winner as ugly scenes blight Dublin Derby
3 years ago
QUIZ: Can you beat the clock and name all 20 SSE Airtricity League clubs?
Next Page