It was a game Ireland should've won but no-one seemed to care because they're all going to France.

Martin O'Neill's men leaked an 85th minute goal to be held 1-1 by Holland despite controlling large spells of the clash.

A first half Shane Long goal set Ireland on their way but they were eventually pegged back.

END_OF_DOCUMENT_TOKEN_TO_BE_REPLACED

Still though, a number of players will have given the manager some food for thought.

Didn’t really have much to do for most of the game. Just stood chewing his gum, looking well and then plucked a dangerous ball brilliantly from the skies. Somewhere amidst the Mexican Wave mayhem in the second half too, he got down quickly to his right to turn one away from his six-yard box but looked a little indecisive for the Dutch equaliser when he came half way and stopped. 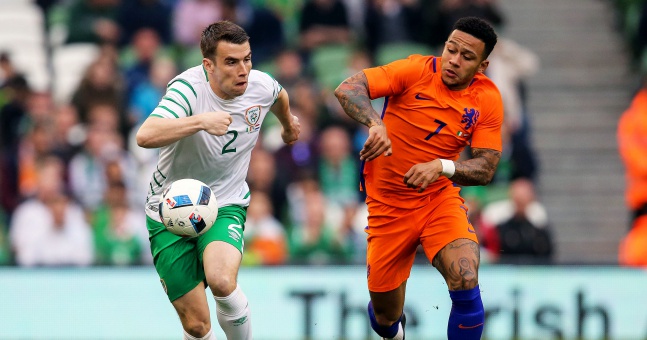 END_OF_DOCUMENT_TOKEN_TO_BE_REPLACED

Woke poor Memphis Depay up after about 30 seconds when he dinked the ball over the winger’s lazy tackle and went charging down the right. It would be a theme for the rest of the game as he bombed forward at every opportunity and his delivery was on the money too, mostly with his left foot. Defensively as solid as always. Fast, strong, smart, his defensive qualities are probably the best part of his game, no matter what Rob McDonald thinks.

Superb powering header that looked to be blocked on the line with a hand before Shane Long put it in anyway. Got free, got up, and got all of that prized Waterford muscle behind it. Looked sound on the back foot all night too. 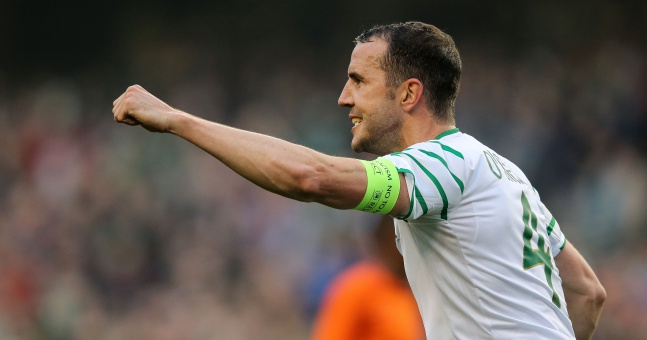 END_OF_DOCUMENT_TOKEN_TO_BE_REPLACED

Fears nothing but nobody. Back at the heart of defence, back roaring orders at John O’Shea standing next to him. You know John O’Shea – the captain, the Champions League winner, the 100+ capped John O’Shea. Shane Duffy is a centre half beyond his years and he looked every inch as comfortable as the rest of them with a number of crucial interceptions and hard-hitting challenges. Will probably rue not scoring one of his chances just after the break and seemed to lose his man for the equaliser. It was another good night for him though.

Meanwhile, Shane Duffy is back on the pitch roaring at anyone who'll listen.

And moreso at those who won't listen.#IRLNED

His left foot was pure filth - in the good sense of the word. Set pieces were frightening. Curled a free kick from the left that had the Dutch ‘keeper reaching with his eyes closed just hoping to get something on it. Whipped in a ferocious corner for the opening goal right onto John O’Shea’s head. Set up Shane Duffy with another glorious delivery straight after the break and, about five seconds, another free kick was forced a Dutch player to deflect just past the post. Then, about three seconds after that, he put one on Duffy’s head again but the Derry man blazed over from the corner. Has a real aggressive edge to his defensive game now too.

Sat in his usual role and produced a couple of real timely tackles. Was fairly positive in possession too, looking to square up when he got on the ball and drilled a couple of measured passes through to his front two. Good outing for just over an hour.

Sharp and tidy without ever really imposing himself on the game. Worked damn hard, positioning was good and didn’t do anything wrong. It wasn’t a night to play safe though. Positions are up for grabs. 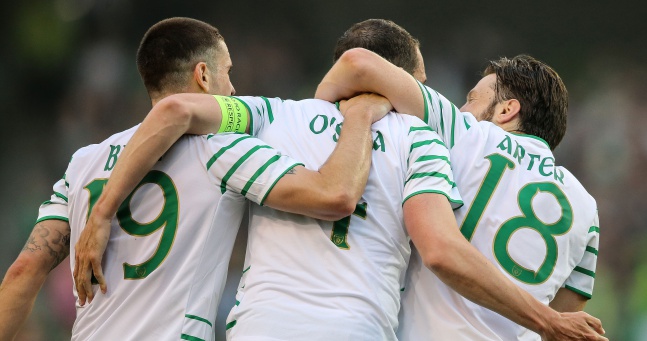 There was a two or three minute spell in the first period where it just seemed like Ireland were playing a training game, called Arter and Back. After Shane Long had the side in front, the Dutch were pressing but the Bournemouth midfielder took the sting out of their intensity as he controlled the ball, found men and took it back off them again relentlessly for an extended period. Sprinted around manically looking to win the ball back and seemingly hurt Dutch men. In what was just his second Ireland cap, he showed that he’s ahead of some of O’Neill’s midfield options. Awarded man of the match at the end too. Really forcing the manager's hand.

Absolutely ripped the orange jerseys apart with one scintillating pass out to Coleman’s run. It was as if someone was controlling him on a game of FIFA and clipped up a delightful L1 Triangle. Coleman won the corner, Ireland got the opener. Got 75 minutes, definitely wasn’t the second-by-second Wes Hoolahan involvement but no-one expects that. Always looked for the ball in that role off the two front men though. 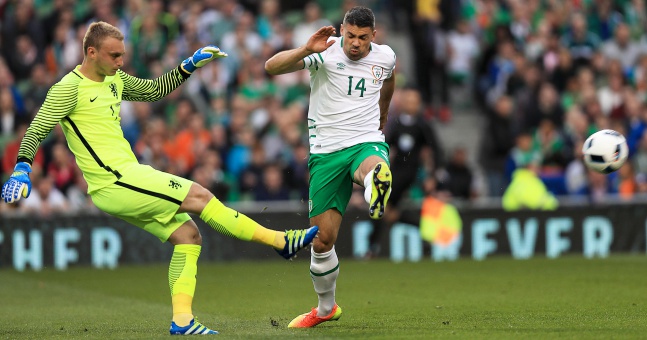 The Republic of Ireland Supporters Club Player of the Year was subdued enough in the first half and then burst to life after the break. Straight away, a rebounded header tested the ‘keeper, he started using that renowned back of his to hold off men and draw in the ball and chipped a beautiful pass over his head for Coleman to chase onto. Set Shane Long up with a cushioned header and began to dominate the middle third.

Under the watchful eye of Mauricio Pochettino, he was thrown himself into way too many challenges for the Irish public’s nerves could handle. He was fighting for every 40-60 ball, nicking in and winning some of them and finding himself chopped around the legs most of the time. Was a superb outlet as usual though, not just in behind but with his back to goal too. Nicked in sharply for the rebound to open the scoring. 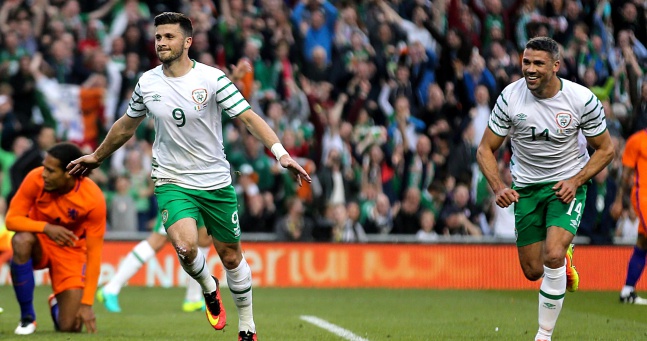 Probably could've done with the start ahead of Whelan but didn't exactly dominate when he did get his half hour. Will want and need more time to impress in Cork on Tuesday.

Great footwork in the middle of the field to wriggle out of trouble. Got the crowd going again with his energy and enthusiasm and looked an option again playing up top when he replaced Shane Long. His performances there could be bad news for the other strikers trying to get a seat on the plane.

You can tell he only made it back for Derby's last two games. Still not the same energetic man that was tearing it up during qualifying. He has a big camp ahead of him, especially with the Harry Arter conundrum now. 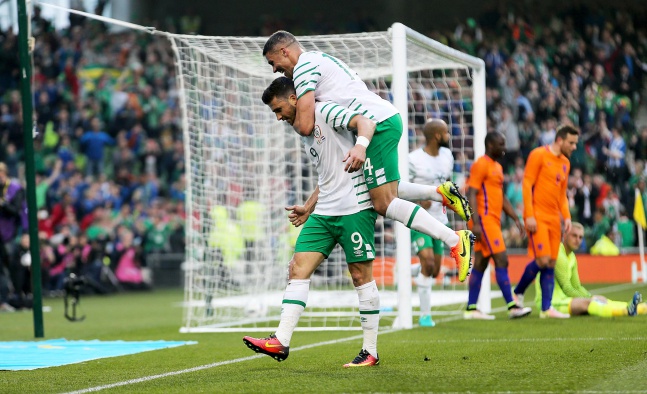 Didn't get much time but his appearance made a record four Derry men on the field for Ireland. 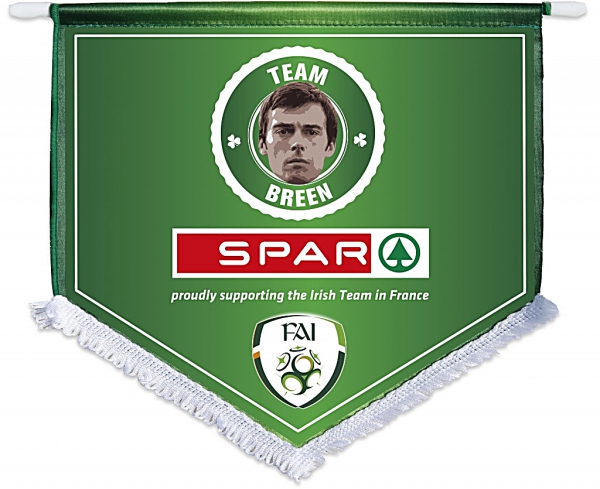 
popular
Rangers legend says he and Roy Keane didn't speak during Man United spell
Chris Sutton praises and throws subtle dig at Rangers after Europa League final loss
The coolest customer in hand-ball hoping to carry on the family tradition for Kilkenny
"Certainly not a position that I'd like to be in" - Rory McIlroy on Greg Norman controversy
Rhodri Giggs accuses Gary Neville of hypocrisy over Salford sacking
"I think there are only five Kilkenny players who are guaranteed to start on any given day" - Cody's motivational methods
FootballJOE's Career Path Quiz: #6