Ireland need to change their formation.

The Republic of Ireland are back in action on Wednesday night as they host Ukraine at the Aviva Stadium in the Uefa Nations League. Ireland will be aiming to bounce back from a disappointing defeat to Armenia on Saturday.

Stephen Kenny's side lost 1-0 in Yerevan to the team ranked 92nd in the world and were disappointing in the game. Ireland were sluggish and sloppy and never looked like beating their opponents.

For the game against Ukraine, the Boys in Green need to tweak their approach and here is the Ireland XI we would pick for the Nations League tie. 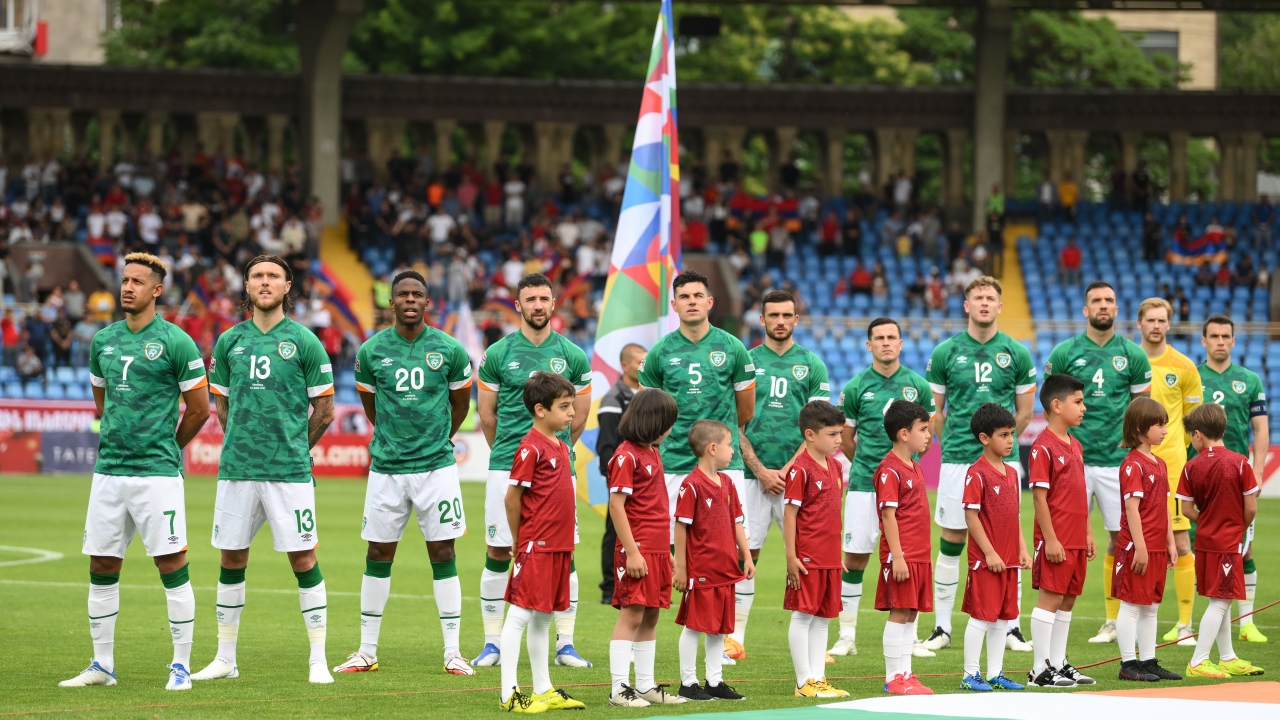 Caoimhin Kelleher retains his spot for the visit of Ukraine. On first watch, it appeared that Kelleher should have got closer to Eduard Spertsyan's long-range strike that won the match for Armenia. However, Ireland's outfield players, who didn't close down the shot, let down the Liverpool goalkeeper.

The back three from that match - Nathan Collins, John Egan and Shane Duffy - retain their places. The trio were arguably Ireland's most dangerous goal threat in the game and were largely solid in defence. 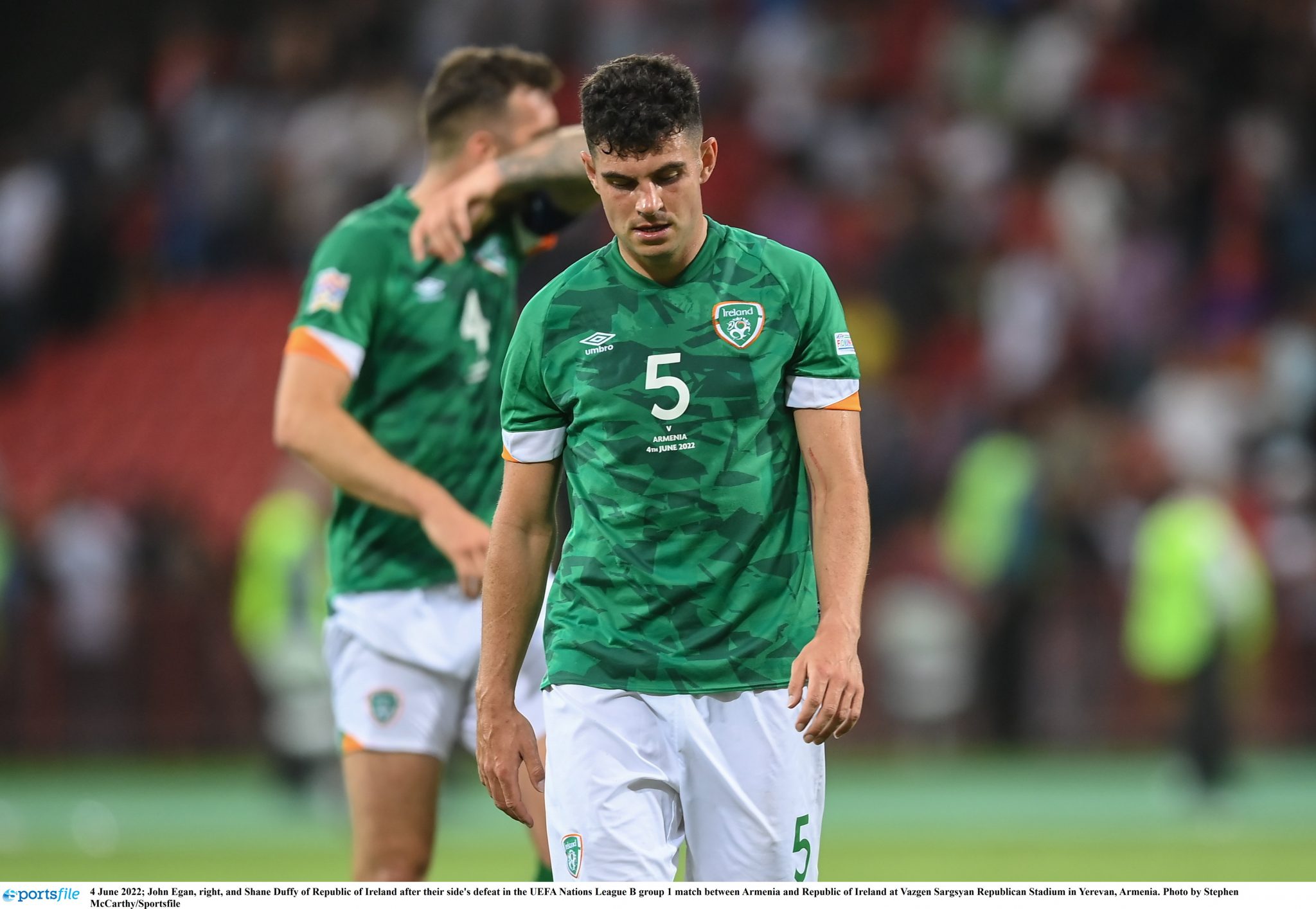 END_OF_DOCUMENT_TOKEN_TO_BE_REPLACED

Enda Stevens starts again at left wing-back. The Sheffield United defender didn't impress against Armenia and he looked rusty, but he arguably needs another game to build sharpness. In the other wing-back position, Seamus Coleman drops out of the team.

The Ireland skipper looked tired against Armenia on Saturday, which isn't surprising after a difficult and exhausting season for Everton. Coleman doesn't bring the same attacking surge as regular Ireland wing-back Matt Doherty, who is injured, and appears more suited to playing on the right-side of a back-three at this point of his career.

END_OF_DOCUMENT_TOKEN_TO_BE_REPLACED

Kenny will never have a better opportunity to play Ogbene in his natural position, and doing so could help fix Ireland's problem position. 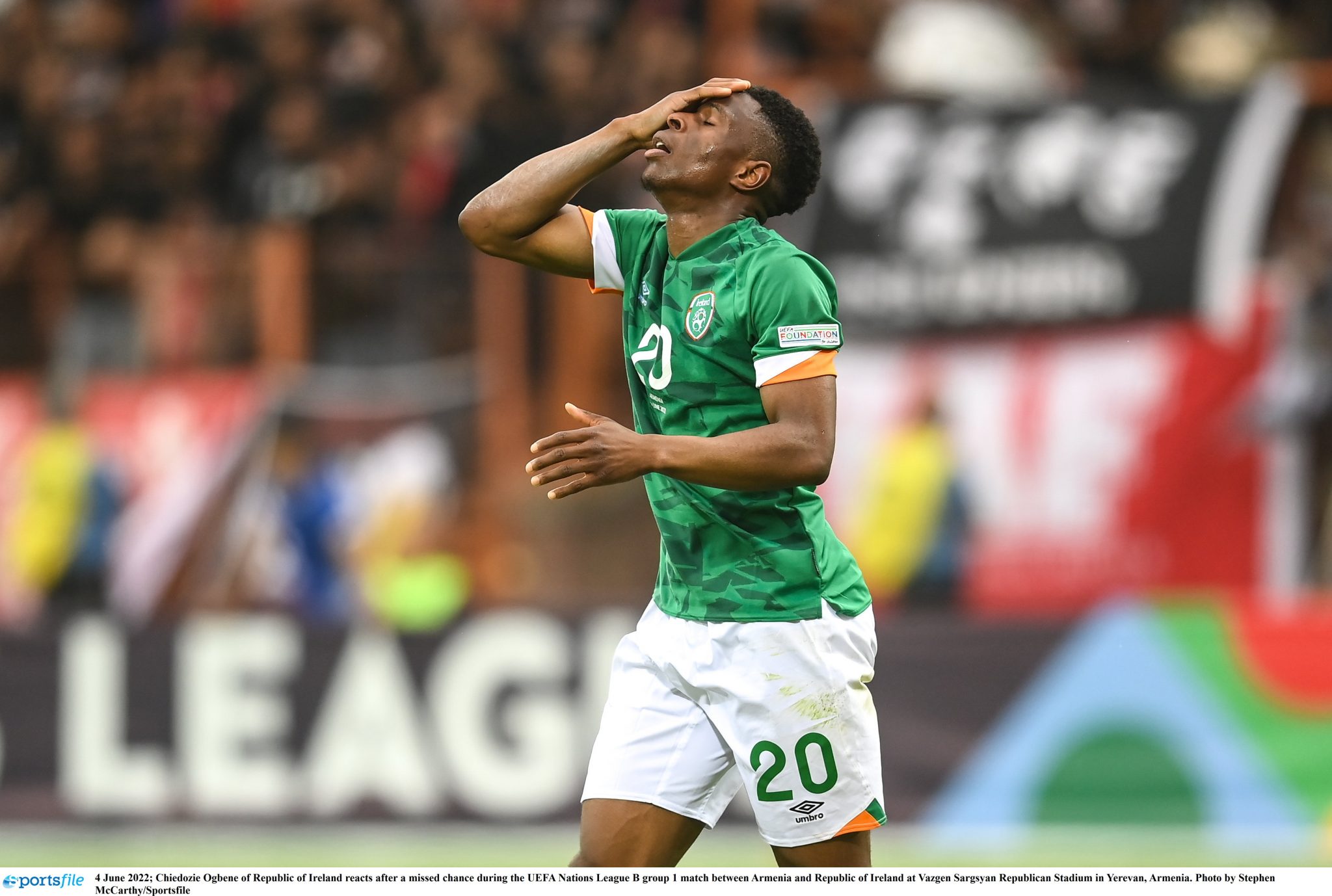 Ireland's two-man midfield of Jeff Hendrick and Josh Cullen has been overrun in recent games, particularly in a friendly against Belgium in March. On Saturday, Armenia took advantage of having an extra midfielder with their goal coming from a breakdown in the Irish midfield.

Hendrick, in particular, struggled after a bright start to the game. Ireland, quite simply, are not good enough to play at international with just two midfielders. So, for the game against Ukraine at the Aviva Stadium, Kenny needs to make a change.

Cullen keeps his place as a deep-lying midfielder and Hendrick drops out as Jason Knight and Conor Hourihane come into this team. Ireland's midfield, however, is the weakest aspect of the squad. If Alan Browne started ahead of Knight or Hourihane, that would be fine too. 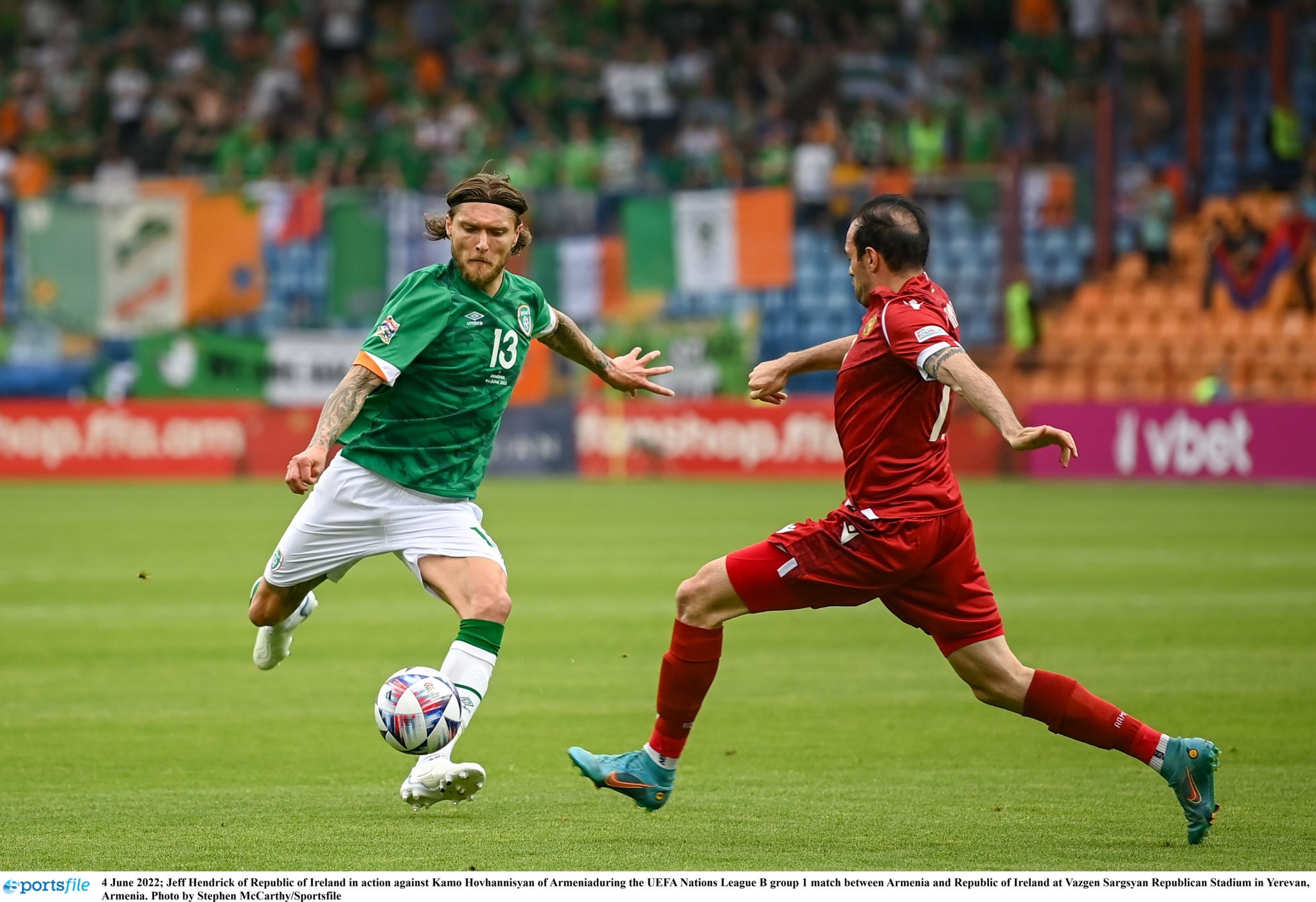 It's much of a muchness in Ireland's engine room, however, and, at this point, the team simply just needs another body in the centre of the field.

Starting a third midfielder would also potentially solve another issue in the Ireland team - the misfiring front-three. Against Armenia, Troy Parrott and Callum Robinson were both on the fringes of the match.

As their combined heatmap from the match shows, Robinson and Parrott wanted to play in the same area and ended up getting in each other's way.

This could easily be corrected, however, by playing them both upfront without a third forward and giving them more space to operate in. 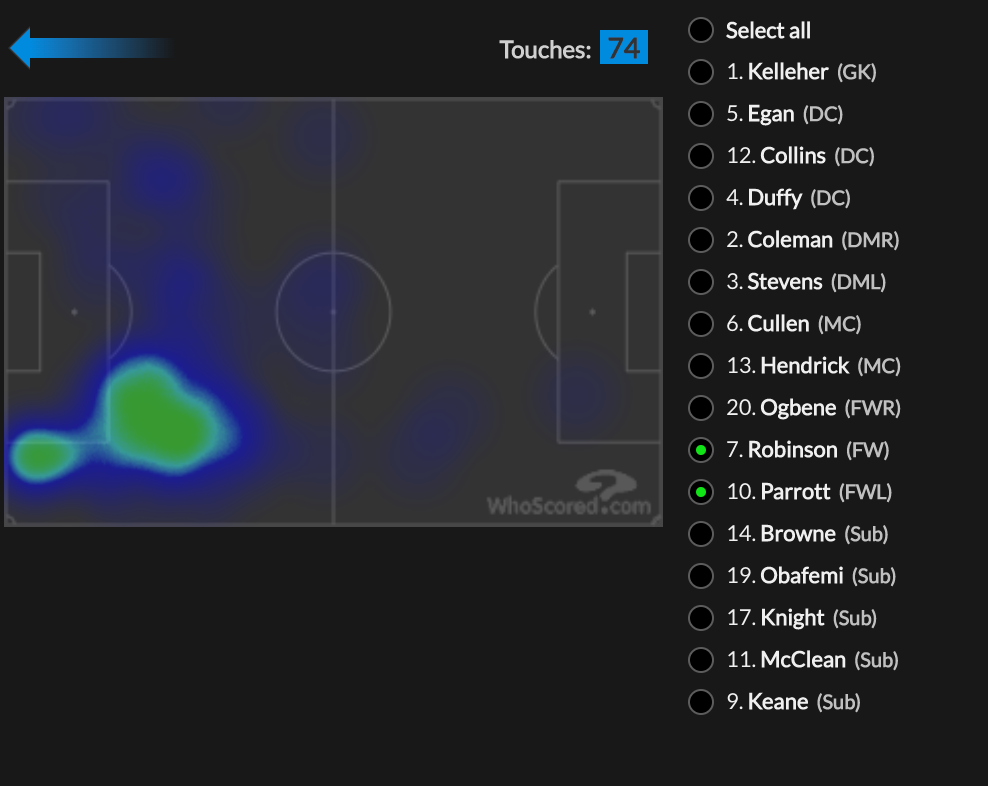 It may seem negative to line out with five defenders, but Ireland's best chance of finding the net is a centre-back scoring from a set-piece, so it makes sense to keep the back-three from the Armenia game.

The lack of attacking threat from wing-back could be solved by switching Ogbene to the position he is familiar with. In midfield, Ireland need an extra player to stop them from being overrun. And up front, Parrott and Robinson need more space to operate in.

Here is the Ireland XI we would pick for Wednesday's match against Ukraine, lining out in a 3-5-2 formation. 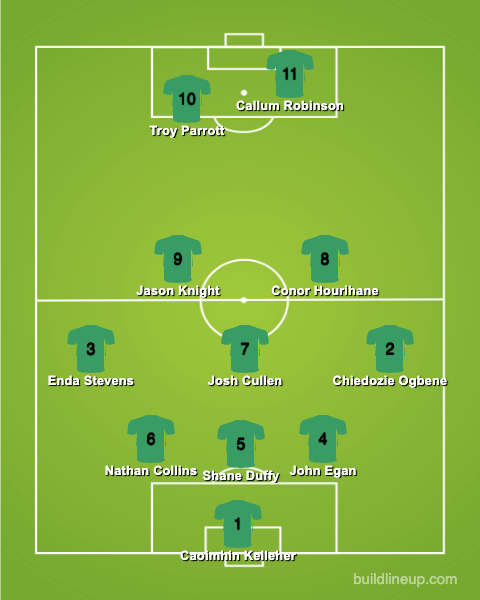 
popular
Sean Dyche set to be named Everton manager after Marcelo Bielsa talks break down
Roy Keane flatly rejects longstanding perception of ex-Man United midfielder Paul Ince
Allianz National Football League Round 1: All the action and talking points
Conor McGregor hit by car ‘at full speed’ while cycling
Roy Keane leaves ITV pundits in stitches after Pep Guardiola's pre-match interview
Quiz: Identify these 15 football clubs that are not named after a place
Study shows rugby positions you are most/least likely to be injured playing
You may also like
1 month ago
Roy Keane cracks ice cold Ireland joke after France lose World Cup final to Argentina
1 month ago
Ireland reportedly line up Lee Carsley as next national team manager
1 month ago
Talksport presenter puts Martin O'Neill to the pin of his collar over Declan Rice and Jack Grealish
1 month ago
UEFA fine FAI €20,000 for Ireland dressing room song
1 month ago
The 10 England World Cup footballers who could have played for Ireland
1 month ago
Shay Given on how far Ireland could've gone at the 2002 World Cup with Roy Keane in the team
Next Page