Ireland Switzerland ON as travelling fans breathe sigh of relief

It was a day for the Genevan ducks.

From dawn until dusk, the rain never stopped in Geneva on Tuesday and Stade De Geneve bore the brunt of it.

The rainfall congregated and the puddles formed. The pitch was sapping and the organisers were worried. Eventually, they called a pitch inspection for 6.00, before Ireland and Switzerland's crucial Group D qualifier clash byt after the forks dug and the conditions were sampled, the field was deemed playable by the match officials and the game will go ahead as planned. 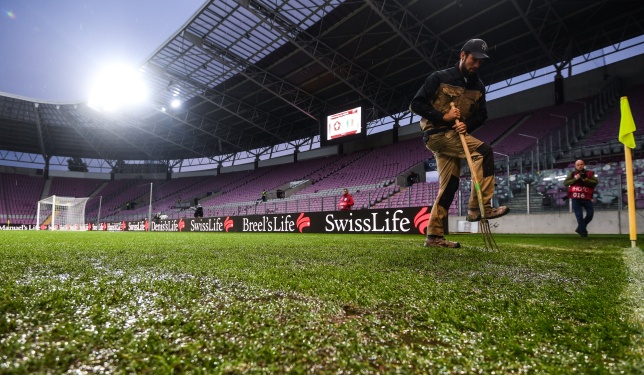 This will come as a huge relief to the committed Irish fans who made the journey over. They forked out big bucks for tickets and for transport. The late postponement would have disaster for them with flights having to be changed at late notice and at a substantial cost.

The game looks like it will be some mudbath too.


popular
Dublin club Man O'War suspends all training and matches after positive Covid-19 test
Roy Keane on the experience of being managed by Jack Charlton at USA 94
The SportsJOE 12 o'clock quiz | Day 113
"Never back against the Irish" - How the BBC covered our USA 94 win over Italy
Jack Charlton's role in getting Roy Keane to Manchester United has been revealed
The SportsJOE 12 o'clock quiz | Jack Charlton special (Day 112)
Max Holloway's class gesture after controversial UFC 251 loss transcends the sport
You may also like
21 hours ago
How an uncultured Englishman conquered Ireland's sporting heart
1 day ago
The SportsJOE 12 o'clock quiz | Jack Charlton special (Day 112)
1 day ago
Growing up in the shadow of Jack Charlton's Ireland
3 days ago
'ROG was the kingpin... he just wanted to win, win, win' - Barry Murphy
3 days ago
"It's too experimental" - Kenny's team for Slovakia showdown begins to take shape
4 days ago
'I went from playing in front of 74,000 to having families cooking hot-dogs beside the pitch' - Shane Williams
Next Page