Republic of Ireland gave it a right old rattle against Portugal but could not find that moment of class to break the deadlock. Our Ireland player ratings have plenty of high points.

Ireland looked very composed in the opening 45 minutes as they stroked the ball out from defence and both Callum Robinson and Chiedoze Ogbene were useful outlets in attack.

END_OF_DOCUMENT_TOKEN_TO_BE_REPLACED

Portugal managed one decent shot on target and won a couple of corners, but Ireland created better openings for Ogbene, Egan and Robinson, who stung Rui Patricio's palms with a long-range curler. That was the height of it, though, as the first half ended scoreless. 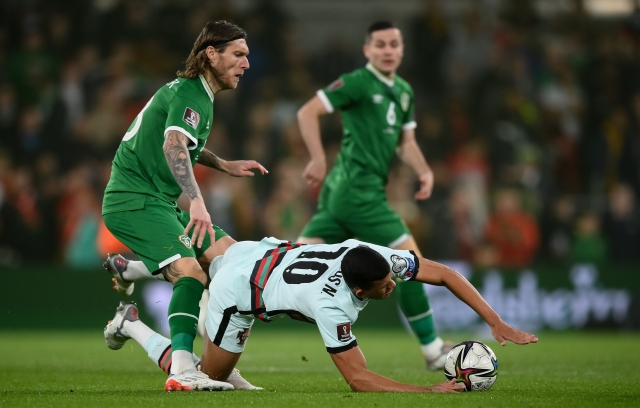 Matheus Nunes of Portugal is tackled by Jeff Hendrick of Republic of Ireland at the Aviva Stadium. (Photo by Stephen McCarthy/Sportsfile)
Advertisement

The second half saw Portugal pick up the pace a bit while still failing to worry Bazunu. Ireland fashioned a decent chance for Josh Cullen but he shot straight at Patricio.

END_OF_DOCUMENT_TOKEN_TO_BE_REPLACED

There was a growing sense as Portugal tipped along that the visitors would be happy to leave with a point. Stephen Kenny sensed that too and brought on Adam Idah for Jamie McGrath for the final half hour.

The next big chance of the game fell to Cristiano Ronaldo. The Irish defence was caught out and it was Jeff Hendrick back defending. He did enough to put the Manchester United star off as he headed just wide.

A soft red card for Pepé, for a second yellow, gave the home fans a real spur, on 82 minutes. Ireland pressed for the winner and thought they had it, through Matt Doherty. The referee had blown up for a Will Keane foul on Patricio, and it was hard to argue against it. Bazunu denied Ronaldo in injury time and that was all she wrote.

END_OF_DOCUMENT_TOKEN_TO_BE_REPLACED

Only had one André Silva shot to parry over in the first half, and he came out to sort a couple of corners. Similar story after the break. Denied Ronaldo at the death.

Recovered well to snuff out a dangerous Ronaldo run. Flung himself horizontal to block a Ronaldo shot, on 17 minutes. Looked good in that back three.

Disappointed to head over from 10 yards out after McGrath found him with a first-half corner. Dealt with Ronaldo when he was left one-on-one, out wide.

Enjoyed the tussle with Ronaldo, especially when the ball was airborne. Blocked one goal-bound Nunes strike. A nuisance in the opposition box, all night. Loafed a Ronaldo free clear.

Will always have this moment...

Clattered into a couple of challenges, early on. Got in a few testing crosses. Spooned over with his right foot when Ogbene picked him out.

Drove forward with purpose on a few occasions and linked up well with Ogbene and Robinson. Rushed a couple of passes to scupper promising attacks.

Gave another good account of himself. Made a smart give-and-go run but Robinson didn't put him through on goal. Presented with a great chance, soon after, but hit the ball straight at Patricio. 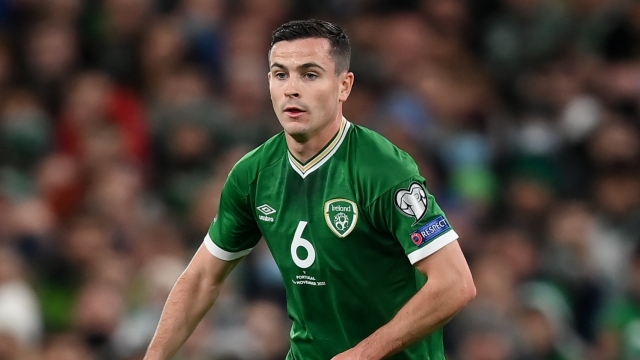 Oozed calmness in the first half as he cut out attacks and instigated a few for his side. Did enough, when chasing back, to put Ronaldo off his header.

Such a tidy player, and looks comfortable at this level. Got a foot in to repel one Ronaldo run. A willing runner but drifted out of the game in the second half, before being replaced.

Caused Danilo no end of trouble. Touch was a bit loose, early on. Drove Ireland forward well on a few occasions. Unfortunate with his yellow card as his opponent really hammed it up. Couldn't keep his header down, late in the first half.

Stung the palms of Rui Patricio after cutting inside to uncork a shot, midway through the first half. Tried to repeat the dose, not long after, but shot was a yard too high, and wide. Got a great cross in but Ogbene headed over. Didn't cover himself in glory for the Pepé red card. Covered most blades of grass out there. 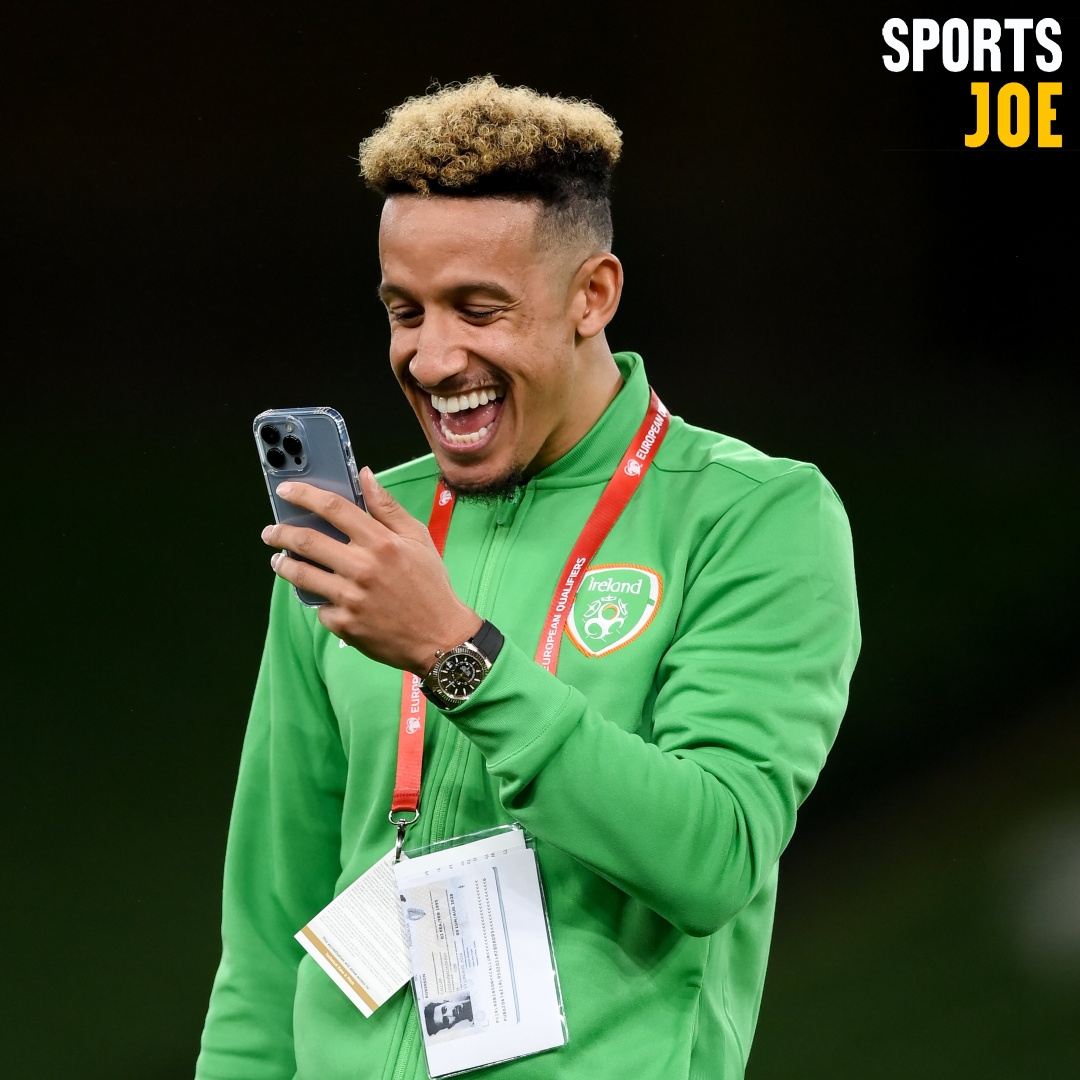 Some tidy touches but still looking for his first senior goal.

Squandered the ball with his over-eagerness.

*Credit for all photos used: SPORTSFILE


popular
Kieran McGeeney on the defensive after post-match questions on brawl
Conor Gleeson's gesture to heartbroken Ethan Rafferty a tonic after sideline brawl
Damien Comer targeted in brutal, chaotic Armagh and Galway brawl
Roy Keane makes good on bet after seeing Cork fall to Dublin
"That bit of a fracas nearly woke us back up again" - McDaid never doubted his boys in the shoot-out
Shane McGuigan does a 'Sueey' Cristiano Ronaldo would be proud of after winning MOTM
Liverpool set £60m Mo Salah price as contract talks continue
You may also like
11 hours ago
Craig Casey relishing challenge of creating rugby history in New Zealand
4 days ago
An exciting, new-look Ireland team that can take it to the Maori All Blacks
5 days ago
"The world came crashing down around me, at that time" - Cian Prendergast
5 days ago
"Brave" Harry Byrne backed to lay down World Cup marker in New Zealand
1 week ago
"Hopefully we'll come away with a gem" - Joe McCarthy potential sealed Ireland selection
1 week ago
Andy Farrell had an interesting take on Irish provinces being outmuscled in big games
Next Page