Stephen Kenny's men were give a couple of scares but revenge, when it came, was sweet. Our Ireland ratings feature one super-sub that scored highly.

Ireland had the lion's share of possession in the first half but were left rueing the referee's decision to dismiss a strong Adam Idah penalty shout.

The home side fashioned the best chance of the first 45 minutes, though, when Gavin Bazunu was at full stretch to tip a deflected shot wide:

Bazunu out here defying the laws of gravity and biology! pic.twitter.com/9HZPfdRfTH

The best Irish chance of the half fell to John Egan but his header, from an out-swinging corner, was well saved by the goalkeeper.

END_OF_DOCUMENT_TOKEN_TO_BE_REPLACED

Ireland got off to a ropey start, after the break, but still worked a chance for Jeff Hendrick that the midfielder skewed wide.

There were hearts in Irish mouths, on 57 minutes, when Luxembourg thought they had scored, only for the goal to be ruled out for a push on Shane Duffy.

Stephen Kenny changed things up by bringing on Jason Knight for Adam Idah. That gave Ireland a bit more control and the attacks flowed from there. James McClean went close with an in-swinging cross, but it was about to get better.

On 68 minutes, Knight was fouled on the edge of the box. Josh Cullen swung in a beauty that was going straight in. Shane Duffy was practically standing on the goal-line and added an extremely close-range flourish for his seventh international goal.

END_OF_DOCUMENT_TOKEN_TO_BE_REPLACED

Ireland were not finished there. The goal that doubled their lead contained 14 passes and finished with a slide-rule Hendrick ball, a Knight back-heel and a sliding Ogbene finish. That was all she wrote. An uplifting finish to a campaign that got off to a horrendous start. 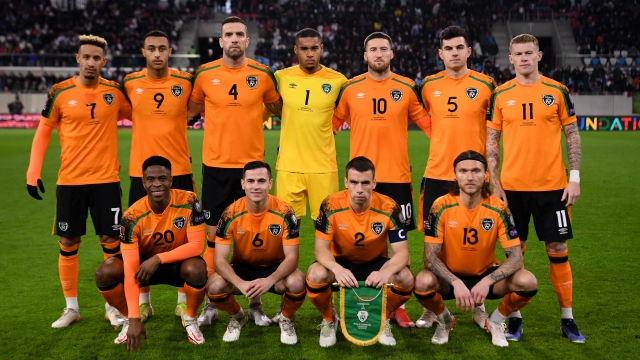 Stunning first half save. Solid under crosses. Lucky, on one occasion, when ball was lobbed into his arms after he was caught off his line.

Threat at set-pieces and crucial interventions in his own box.

So vital to this side's fate. Great blocks and scored the opener.

Another decent performance. Wore the grass out on his flank.

Came close with a cross-cum-shot. Searching ball into the back post led to Robinson's goal. Did well.

Tidy throughout. Peach of an in-swinger for the opener.

Started well. Missed one good chance. Was revived when Knight came on.

Followed up the Portugal game with another fine performance. Capped off with his second Ireland goal.

Did his best to hold up the ball and bring teammates into the game. Should have won his side a penalty but call inexplicably went against him. Drifted out of the game in the second half.

Popped up all over the pitch. Was smothered out by the Luxembourg defence on a few occasions. Willing runner and chaser. Rewarded with a late goal before he went off to wide acclaim.

Super-sub. Came on and made a difference. Foul on him led to free for opener and he set up the second. Set up the third while he was at it.

Came on to help see out the game.

Andrew Omobamidele, Troy Parrott and Conor Hourihane (all came on '89) - Not on long enough to rate


popular
"I went up to the Italians and gave them a big auld shoulder" - Paul O'Donovan does it again
Man United will 'terminate' Cristiano Ronaldo's contract if his attitude doesn't improve
Erik ten Hag's training ground punishment for Man United shows there may be hope yet
Graeme Souness under fire for calling football a ‘man’s game' while sat with Karen Carney
Erik ten Hag reportedly 'furious' with Man United for 'hanging him out to dry'
Declan Rice apologises after Dean Henderson makes penalty save admission
Wexford Under-20 lights it up as Ferns win their first ever county title
You may also like
5 days ago
"I remember just hugging this Irish guy" - How one Kiwi rugby star reacted to Ireland's historic series win
2 weeks ago
Eight Ireland players make final cut in 'World Class' 33-man squad selection
3 weeks ago
The Top 20 rugby players in Ireland, right now
3 weeks ago
Six Irish players make damn impressive 'World XV' that would take some beating
3 weeks ago
The frontrunners for Ireland's 33-man squad for the 2023 World Cup
3 weeks ago
All Blacks media manager explains why Ian Foster appearance was cancelled after Ireland defeat
Next Page