Alan Browne has donated the Ireland jersey he wore during his full international debut to help a Cork man.

Browne put the jersey up for auction in aid of the Jack O'Driscoll Appeal Fund. O'Driscoll was left paralysed after seriously injuring his spine during Storm Emma earlier this year. 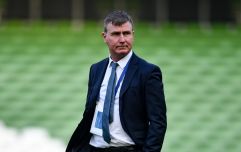 END_OF_DOCUMENT_TOKEN_TO_BE_REPLACED

O'Driscoll, 19, was walking home with friends in Mayfield when he fell in the icy conditions and fractured the C5 vertebrae in his neck.

A GoFundMe page was set up following the incident and has since raised €130,000 to help Jack afford medical treatment and living needs. The aim of the page is to raise €200,000.

Browne has decided to help out. The 23-year-old former Cork City midfielder made his first Ireland start in the friendly defeat to Turkey last month having impressed for Preston in the Championship this season. Browne first appeared for his country last year when he replaced Cyrus Christie in the final 15 minutes of the 3-1 defeat to Mexico.

Browne got his Ireland teammates to sign the jersey worn during the Turkey game before he put it up for auction. There has been a €500 bid for the shirt and Browne will return home to Cork to present it to the owner of the highest bid.

"Jack was brought to Cork University Hospital immediately after the accident," explained the appeal fund's page.

"However the severity of his injury required him to be transferred to the Dublin to undergo surgery in the Mater Hospital.

"He is currently in the hospitals High Dependency Unit (HDU) where he is receiving first class care from the teams of doctors, nurses and other medical professionals. This is the first tentative stage in a long road to recovery for Jack.

"Through all of this Jack has remained positive, upbeat and determined. Since the accident Jack’s family have been overwhelmed by goodwill and support. Therefore, members of Jack's friends and family have established this funding page with the goal of raising the necessary funds for the dedicated support and treatment he will require."

"We feel we owe it to Jack to approach this aspect of his recovery with the same determination he has shown in the early stages of his rehabilitation."

You can visit the Jack O'Driscoll Appeal Fund here. There are also pages set up on Facebook and Twitter.


popular
Frank Lampard reveals details about season-changing conversation with Seamus Coleman
'ROG isn't that sort of guy' - Brian O'Driscoll on first Ronan O'Gara encounters
John Terry hits back at Rio Ferdinand over Premier League defenders ranking
Cutting through the contradictions from one of the worst television segments of the year
Aiden McGeady details the abuse he suffered after playing for Ireland instead of Scotland
Pitch-side microphone picks up Eric Dier joke about Mo Salah
Erik ten Hag orders full report on every Man United player ahead of pre-season
You may also like
1 week ago
Quiz: How well do you remember Ireland's Euro 2016 campaign?
1 week ago
Robbie Brady keen on Bournemouth future after promotion success
1 week ago
Everton weigh up transfer move for Ireland star Gavin Bazunu
1 week ago
Five Ireland players who could be on the move this summer and the clubs they could sign for
2 weeks ago
Wayne Rooney takes aim at Paddy Kenny's goalkeeping in Man City title win
2 weeks ago
Joey Barton comments on Glenn Whelan's future following Bristol Rovers promotion
Next Page