Aaron Drinan has joined Town on a three-and-a-half year contract from Waterford FC.

19-year-old Aaron Drinan has been training with the Championship club since October but has now completed the switch for an undisclosed fee following international clearance.

“It’s great and I’m buzzing to get going,” the Irishman told iFollow Ipswich.

“Not being able to play was tough but I always knew the transfer would go through so I just kept my head down and worked hard."

“The manager has praised me in training so I hope I can take that out onto the pitch and impress him."

🎥 | New recruit, Aaron Drinan has set his sights on getting into the Blues' first-team as soon as possible after completing his move to Portman Road from Waterford today #itfc pic.twitter.com/8oJVx4fIT0

Drinan isn't the first Waterford man to sign for Ipswich. He follows in the footsteps of Republic of Ireland international Daryl Murphy, who played seven seasons for the Blues after a five-year-stint at Waterford. Unsurprisingly, comparisons are already being drawn between the two.

“They’ve started calling me Murph. That sort of thing helps and I’ve received a warm welcome from everyone here. I’m so glad to be a part of the set-up now and I’m ready to crack on.” 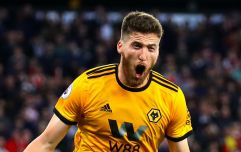 END_OF_DOCUMENT_TOKEN_TO_BE_REPLACED

Not a bad nickname to have considering what Murphy, now at Nottingham Forrest, did during his time at the club. Murphy's 27 goal tally in 2014/15 made him the Championship's top marksman that season and earned him the club's player of the year accolade.

Manager Mick McCarthy has seen the progress Drinan has made over the last few months and he likes what he sees.

“He’s really impressed me. He hasn’t looked out of place in training at all. The only frustrating thing is that he hasn’t been able to play but he’s ready to go now.”

Drinan will wear the number 26 shirt for Town and could feature as early as Saturday for Town's FA Cup third round tie at home to Sheffield United.

popular
The SportsJOE 12 o'clock quiz | Day 143
Three teams Leinster can pit against each other to prepare for Munster
SportsJOE 2000s Football Quiz | Round 12
Rory McIlroy defends Dustin Johnson after Brooks Koepka comments
Collin Morikawa makes huge world rankings leap as Lowry drops back
Only a Champions League fanatic would get full marks in this quiz
The SportsJOE 12 o'clock quiz | Day 142
You may also like
1 year ago
Predicted Ireland XI for Poland match shows how short of players we are
1 year ago
Former Derry City striker Ronan Curtis called up to Ireland squad
1 year ago
Gareth Bale and Seamus Coleman carried themselves very differently in Cardiff
1 year ago
Can you name Ireland's starting XI when they beat the world champions in 2015?
2 years ago
Irish teenager Caoimhin Kelleher keeps clean sheet against Manchester United
2 years ago
Conor Sammon has completed his fifth move to a Scottish club
Next Page