Crystal Palace manager Roy Hodgson has "no reason to disbelieve" Wayne Hennessey after the goalkeeper denied claims that he was pictured making a Nazi salute while dining with his teammates recently.

An image of Hennessey, taken at a meal with his Palace teammates, was widely circulated on social media earlier this week. This prompted the 31-year-old to later tweet that he had been "waving and shouting" at the person taking the picture - not making an offensive gesture.

While it's since emerged that the Football Association plan to investigate the matter, Hodgson has told reporters on Friday that he accepts Hennessey's explanation.

"I believe him totally," the former England boss said. "I have no reason to disbelieve him. 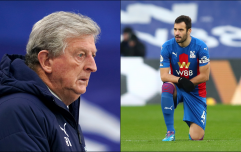 END_OF_DOCUMENT_TOKEN_TO_BE_REPLACED

"The other players had no awareness of anything inappropriate, so much so that they had no idea before the photo was posted that it had happened.

"Wayne has explained himself very satisfactorily to both me and the club. I know Wayne, I know the type of man he is and I have no hesitation whatsoever in backing him and backing his version of the story."

Hennessey played for Palace during their FA Cup Third Round defeat of Grimsby Town last weekend but is expected to drop to the bench for this week's league meeting with Watford.

popular
Alex Ferguson's dismissive comments confirm truth about Jordan Henderson
Wayne Rooney story about Memphis Depay shows why he failed at Manchester United
The SportsJOE 12 o'clock quiz | Day 286
QUIZ: Can you name the Scottish football cult heroes?
"There were some tough battles but I was happy to test myself against the best"
QUIZ: You have 30 seconds to answer this one tricky football question
QUIZ: Name the clubs to have lost in every Champions League final
You may also like
1 month ago
Sebastian Haller and Jack Harrison screamers light up midweek Premier League
2 months ago
Disallowed Patrick Bamford goal labelled ‘worst decision in football history’
1 year ago
Premier League rivals come in for Wilfried Zaha amid Arsenal negotiations
1 year ago
Wilfried Zaha should reject Arsenal - they aren't big enough for him
1 year ago
Man United find extra wedge down the couch for Aaron Wan-Bissaka
1 year ago
Man Utd 'make substantial bid' for Aaron Wan-Bissaka
Next Page