"This will be Paulo Dybala's team"

Juventus defender Giorgio Chiellini has claimed Cristiano Ronaldo 'held back' Paulo Dybala during his time in Turin, suggesting that the team revolved around him.

Ronaldo - who finished as the top goalscorer in Serie A last season with 29 goals - made a sensational deadline-day return to Old Trafford this summer after three years in Italy.

The Portuguese captain marked his return to English football with two goals as Manchester United secured a comfortable 4-1 victory over Newcastle on Sunday.

On the other hand, Juventus have endured a disappointing start to their respective campaign - taking just one point from their opening three matches of the Serie A season after losing 2-1 against Napoli at the weekend.

Despite an underwhelming start to the season, Chiellini insisted that The Old Lady can cope without Ronaldo, even suggesting that the 36-year-old's departure will actually have some positive effects on Massimiliano Allegri's side.

Speaking to DAZN, as quoted by Football Italia, the Italian defender - who has made over 500 appearances for Juventus - said:

"When you have a world-class player like Cristiano, you cannot help but use the team to play for him.

"We must be grateful to Cristiano for all he did during these years at Juventus, but we carry on.

"This will be Paulo Dybala's team. Over the last couple of years, he lowered his average goals because of Cristiano's presence, but he is a key player for this team and that is recognised by everyone." 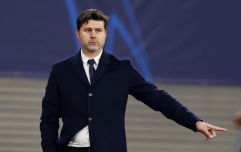 END_OF_DOCUMENT_TOKEN_TO_BE_REPLACED

Juventus were without Dybala for Saturday's defeat at the hands of Napoli, with the 27-year-old attacker having been part of the Argentina squad that defeated Bolivia in a World Cup qualifier on Friday.

The Argentine has scored 101 goals in 256 games in the famous black and white shirt, but only managed 5 goals in 26 appearances last season.

As well as this, Ronaldo had been the clubs' top scorer in each of his seasons whilst in Turin - meaning that the pressure to score goals has risen emphatically for Dybala.


popular
'Go and get a job' - Ronnie O'Sullivan responds to Shaun Murphy's amateur player comments
BT Sport release statement as Chris Sutton is denied access to Ibrox again
'Joe Schmidt would do wonders with the All Blacks'
QUIZ: Name these 42 Premier League players from the 2000s
Sean O'Brien praises "unbelievable" Robbie Henshaw after his winning return
"Never mind Plan B, put minors back up to u18" - Conor McManus hits out at new age-group rules
Pundits criticised by scientists for linking player collapses to vaccines
You may also like
2 days ago
Ibrahimovic tells Manchester United they're living in the past and says Premier League is overrated
2 days ago
Man United players reportedly unhappy with Irish coach's 'school teacher' approach
3 days ago
David de Gea responds to thoughtless criticism to save Man United again
3 days ago
Paul Scholes didn't hold back in his assessment of 'embarrassing' Man United
3 days ago
Mauricio Pochettino plays down Man United links
3 days ago
Rio Ferdinand suggests ex-Man United coach to be club's interim manager
Next Page