Gareth Bale out of Ireland game

Ireland look like they'll need six points to have any chance of reaching the playoffs.

That means Ireland need to beat Moldova on Friday and then go to Cardiff on Monday and beat Wales.

Those chances have been bolstered considerably with news that Gareth Bale will miss his country's last two games.

The Real Madrid star picked up another injury on club duty against Espanyol and will now be absent for the crucial last game when Ireland come to town on October 9.

It's also important to note that Wales will travel to Georgia for their penultimate clash and they now do that without their best and most influential player. Still, Group D are currently bottom of the rankings for best second-placed finishers and therefore, at the moment, wouldn't be given a spot in the playoffs.

So Ireland should be looking to win both games regardless of Wales' result in Georgia but that has gotten more realistic with Bale's injury.

Perhaps he just got too anxious at the thought of Stephen Ward hunting him down. 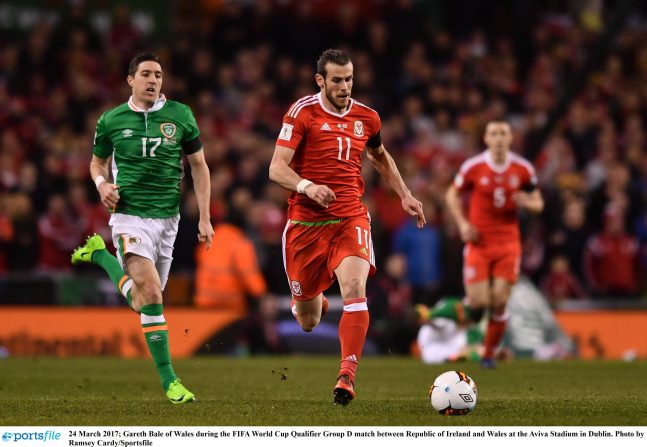 popular
Only old-school fans will get 20/20 in this 1990s footballers quiz | Part 2
The SportsJOE 12 o'clock quiz | Day 186
Rio Ferdinand story about Dwight Yorke conversation shows Alex Ferguson's ruthless streak
How The Mountain lost 36kg ahead of boxing fight with The Beast
Sam Bennett's green jersey masterclass got Lance Armstrong talking
QUIZ: Identify the football club from these 12 crests
QUIZ: Can you beat the clock to name Ireland's record goalscorers?
You may also like
2 weeks ago
"It's in the club's hands and they make things very difficult to be honest"
1 year ago
The rowing workout behind Gareth Bale's elite endurance levels
1 year ago
David Moyes on the players he wanted Man United to sign when he was manager
1 year ago
Gareth Bale denied potential final appearance for Real Madrid
1 year ago
Bale's agent says Madrid fans should be ashamed of themselves
1 year ago
Real Madrid fans boo Gareth Bale after Barcelona horror show
Next Page