O'Connor will join Crewe Alexandra on loan until January 7 2019 and will be available for Alexandra's trip to face Macclesfield Town at Gresty Road on Saturday.

O'Connor joined Preston last summer for an undisclosed fee from Cork City after impressing in the League of Ireland alongside current Preston striker Seanie Maguire.

The 23-year-old played just eight games for the lilywhites last season before finishing out the campaign with Fleetwood Town on loan. 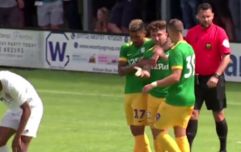 END_OF_DOCUMENT_TOKEN_TO_BE_REPLACED

Horgan had fallen out of favour with Preston manager Alex Neil but he's looking forward to more first team football in Scotland this season.

"I am delighted to have made the move to Hibs," Horgan told Hibernian's official website. "I've spoken to the manager and am excited for his plans for the season ahead.

"Obviously the boys have started well in Europe and the league - they had a good season last year and the ambition is there to follow that up with another successful year.

"I'm ready to play and looking forward to trying to break into the team."


popular
Wayne Rooney story about Memphis Depay shows why he failed at Manchester United
You'll have to be a diehard fan to get 20/20 in this Liverpool players of the 90s quiz
The SportsJOE 12 o'clock quiz | Day 288
QUIZ: You have 30 seconds to answer this one tricky football question
SportsJOE 2000s Football Quiz | Round 11
The SportsJOE 12 o'clock quiz | Day 286
In defeat, Jerry Kelly dies with his boots on in coming of age final display
You may also like
1 year ago
Ireland international Callum Robinson linked with Premier League move
1 year ago
Callum Robinson smashes home double as Preston thrash Ipswich Town
1 year ago
Sean Maguire scores last minute winner for Preston ahead of joining up with Ireland squad
1 year ago
Alan Browne continues remarkable form in front of goal
2 years ago
Preston goalkeeper's unbelievable gaffe gifts Birmingham City the lead
2 years ago
"I feel that I’m mentally strong" - Sean Maguire ready to put injuries behind him to take Ireland chance
Next Page