A report by Nielsen, a leading global information & measurement company, predicts that FIFA will see a $179 million dip in sponsorship revenue at this month's World Cup in Russia compared to the last World Cup in Brazil in 2014. 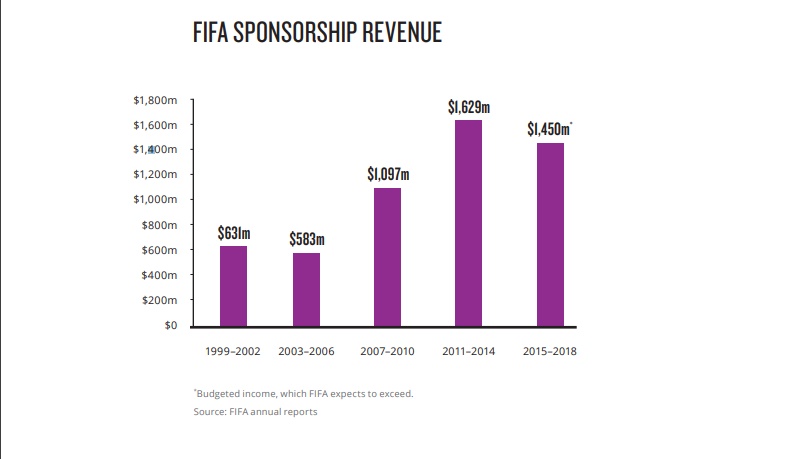 Nielsen admits that this year's tournament in Russia was a tougher sell to sponsors for FIFA but that they will hope for an upturn in sponsorship revenue for the 2022 FIFA World Cup in Qatar.

An extract from the report reads:

"In each four-year cycle, the World Cup accounts for the vast majority of the organization’s sponsorship revenue – for example, in 2010 sponsorship income from other events generated $25 million, and in 2014 it generated
$49 million.

"The 2015–18 cycle was a tougher sell than the previous two, but a new crop of sponsors, including several from China, helped FIFA weather the storm. FIFA will be hoping to return to growth in the cycle leading up to the 2022
World Cup in Qatar.

"It can probably look forward to support from Middle Eastern brands seeking to capitalize on the region’s first World Cup.

"The organization will also be hoping for a positive response from sponsors to the ’FIFA 2.0’ modernizing reforms introduced by president Gianni Infantino in 2016.

"These include investing in football development and increasing participation, introducing new standards for transparency and governance, and aiming to double the number of female players worldwide to 60 million by 2026."

The downturn in sponsorship revenue coincides with a number of top FIFA officials being arrested at a hotel in Switzerland in 2015 on suspicion of receiving bribes totalling $100m as well as Sepp Blatter's resignation as role of president and the subsequent eight year ban he received from the FIFA Ethics Committee for conflict of interest and dereliction of duty over a 2m Swiss francs (£1.35m) “disloyal payment” the former FIFA president made to former UEFA president Michel Platini.

Sony, Johnson & Johnson and BP’s Castrol, have all pulled out of sponsoring this year's tournament.


popular
Eamon McGee just couldn't help himself with Armagh-melee tweet
Kieran McGeeney on the defensive after post-match questions on brawl
Damien Comer targeted in brutal, chaotic Armagh and Galway brawl
Conor Gleeson's gesture to heartbroken Ethan Rafferty a tonic after sideline brawl
QUIZ: How well do you know Manchester United players of the 90s?
Colm Cooper calls for "harsher penalties and more severe" punishments to stop brawls
Craig Casey relishing challenge of creating rugby history in New Zealand
You may also like
3 years ago
Gareth Southgate offers classy response when asked about Declan Rice
3 years ago
Toni Kroos responds strongly to Mesut Ozil claims of racism in German camp
3 years ago
Benjamin Mendy responds to Pep Guardiola's comments on his social media use
3 years ago
Everton on brink of signing Yerry Mina from Barcelona
3 years ago
Jose Mourinho explains why Paul Pogba plays better for France than he does for Man United
3 years ago
Thierry Henry 'verbally agrees' to become new Aston Villa manager
Next Page