Fernando Torres has got absolutely jacked since retiring from football

Yes, it really is him

Understandably, many of us on these shores haven't seen too much of Fernando Torres of late.

The former Liverpool and Chelsea striker left English football nearly seven(!) years ago, eventually hanging up his boots up in 2019 after returning to Atletico Madrid for a bit and then playing out in Japan for a couple of seasons. Since then, there's been little mention of him - until the last few days.

After the announcement that Torres is now back at Atleti, where he is beginning his journey into management by taking charge of the club's B team, comes the far more important news that he has become... well, absolutely fucking jacked since he called time on his playing days.

Pictures of Torres were circulated on Twitter on Tuesday, with football fans who remember the striker's slender frame during the days of his Liverpool peak struggling to believe the images were genuine.

Now, after a bit of investigative journalism (we checked his Instagram page), we can confirm that the pictures are completely legit and that Torres has spent the best part of the last two years chained inside a weights room. 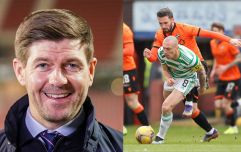 END_OF_DOCUMENT_TOKEN_TO_BE_REPLACED

They come from a video which the former Spain international has posted to his social platforms which announce his new role as brand ambassador for AW8 in Southeast Asia. The full video is here if you really want to see it. And let's face it, if you're as sceptical as most of us initially were, you probably do want to give it a watch.


popular
Conor McGregor bought out of Proper 12 whiskey company
Leinster reach PRO14 Final but Ulster have every right to feel aggrieved
The SportsJOE 12 o'clock quiz | Day 312
Sean O'Brien's parting gesture won't soon be forgotten by Scott Penny
Longford leaving cert schools Europe's finest with measured masterclass
"I'm sorry" - New bantamweight champ in tears as UFC history is made
QUIZ: How well do you remember the 2010 World Cup?
You may also like
1 day ago
Granit Xhaka reaches point of self parody with hilarious gaffe for Burnley goal
1 day ago
Zlatan Ibrahimović to make sensational return to Sweden squad aged 39
1 day ago
Best XIs for North vs South Premier League All-Star match
1 day ago
QUIZ: Can you name every starter from the 2005 Champions League final?
2 days ago
Matt Ritchie apologises to Steve Bruce for bust-up in training
3 days ago
Steven Gerrard could miss Rangers' title winning game after red card
Next Page