Four years ago, Ricksen was diagnosed with Motor Neurone Disease - a condition which affects the brain and nerves - and has since lost the ability to speak as a result.

However, a post by the former Rangers player's biographer and friend, Vincent de Vries, has revealed he is now using a special machine to communicate.

In the video below, Ricksen speaks through the machine, saying: "Hello, for the people who don’t know me I am Fernando Ricksen and I suffer from Motor Neurone Disease also known as ALS."

"Because of this muscle disease I'm unable to speak. I have a new device that speaks for me.

"At the moment I only have a female voice so bear with me.

"First I want to thank everyone for the love and support on my birthday. Thank you for the energy."

Fernando Ricksen: "Thank everyone for the energy." pic.twitter.com/GkXEHYO1Ps

The 42-year-old started to use the new piece of equipment last month after it was donated to him by Dutch firm rdg Kompagne. 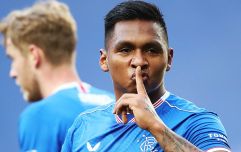 END_OF_DOCUMENT_TOKEN_TO_BE_REPLACED

Using his eyes, he can select pre-programmed phrases which the machine reads aloud to his wife, Veronika, and five-year-old daughter, Isabella.

Speaking to the Scottish Sun, he explained that it was "life changing".

"Finally I can talk and explain myself again," he said. "I can tell them how I feel and what I mean - ask them how they are, make jokes and just be a part of the conversation again."

"My voice is really bad and as it will only get worse or disappear I decided it was time to get help for this.

"It has made life much easier as I can tell my wife what I need without getting into an argument!"

The machine Ricksen is using to communicate is similar to that used by Stephen Hawking, who died earlier this year after suffering with MND for many years.


popular
Referee Mathieu Raynal puts Sexton in his place after TMO mess
Sexton compares "brilliant" Irish debutant Craig Casey to Jonny Wilkinson
Tadhg Beirne now delivering what so many of us knew he was capable of
The SportsJOE 12 o'clock quiz | Day 308
Owen Farrell rages at referee Pascal Gauzere as Wales catch England sleeping
"I was like, ‘My ear is hanging off my head. Can you not see that?!'"
Will Connors locks down No.7 jersey with two rapid succession plays
You may also like
4 months ago
Alfredo Morelos on ultimate wind-up as Shane Duffy has day to forget
1 year ago
"He deserves his ban and he's got everything to do to get back into my team"
1 year ago
Rangers ordered to close section of Ibrox after UEFA ruling
1 year ago
Steven Gerrard ridiculed for 'brutal truth' about Celtic league win
1 year ago
Alfredo Morelos scores and is booked for mocking opposition fans because of course he is
1 year ago
Steven Gerrard confirms Rangers will not give guard of honour to Celtic
Next Page