Oh, you thought Manuel Neuer was a maverick for dribbling 10 yards outside his own area, did you? Well he's an amateur compared to Fernando Muslera.

Uruguay international goalkeeper Muslera, who you may remember from his performance against England at the last World Cup, has been playing for Galatasaray for the last five years.

This weekend the 20-time Turkish champions beat Antalyaspor 3-1 at the Türk Telekom Arena, and Muslera decided to have a bit of fun. 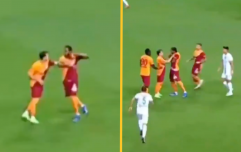 END_OF_DOCUMENT_TOKEN_TO_BE_REPLACED

After rushing to intercept a through-ball, it would have been easy for Muslera to panic and hoof the ball aimlessly away, or to shield it before going down for a cheap free-kick.

Instead, with Samuel Eto'o approaching and the ball skidding into the Antalyaspor half, he kept going, beating the Cameroonian and calmly laying the ball off to an outfield teammate.

We know what you're thinking - we've buried the lead here, haven't we? 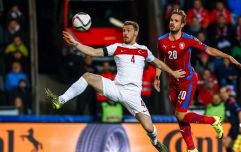 END_OF_DOCUMENT_TOKEN_TO_BE_REPLACED

The same Samuel Eto'o who wasn't young when he joined Chelsea from Anzhi Makachkala in 2013.

The same Samuel Eto'o who since played for Everton and Sampdoria, before offering two suspiciously similar goodbye messages to fans of the two clubs.

And, you know what, he's playing well. Now 35 years old of age, the former Barcelona striker has 21 goals in 35 games for Antalyaspor.


popular
"To be able to call myself the fastest man in Irish history is just amazing" - Olatunde overjoyed after record-breaking run
“Players flourished when Roy Keane left” - Rio Ferdinand on why Keane was a 'detriment' to Man United
The moment Israel Olatunde realised he qualified for the Euro 100m final is what it's all about
Jamie Carragher on the three Man United players Erik ten Hag can't trust
Wexford, Waterford and Kilkenny down some good men as Australia calls
"I went up to the Italians and gave them a big auld shoulder" - Paul O'Donovan does it again
Jurgen Klopp reacted like everyone else to Darwin Nunez headbutt red card
You may also like
3 years ago
Violent scenes on the pitch after Istanbul derby between Fenernahçe and Galatasaray
4 years ago
Bafetimbi Gomis collapses on pitch during Galatasaray match, but continues playing
5 years ago
BREAKING: Marouane Fellaini signs five year deal with Galatasaray
5 years ago
Marouane Fellaini 'has agreed personal terms' to leave Manchester United
5 years ago
Mamadou Sakho has been offered a move from Liverpool, and he should probably take it
5 years ago
Besiktas' rivals Galatasaray pay tribute to those who lost their lives in Istanbul bombings
Next Page