Patrick Bamford charged with 'successful deception of a match official’

Aston Villa's Anwar El Ghazi will be available to play in the promotion-chasing club's next three games.

The 23-year-old had been sent off for an alleged elbow on Leeds' Patrick Bamford in the aftermath which followed the home side's opening goal on Sunday. 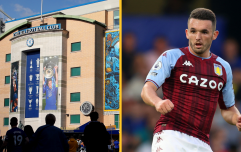 END_OF_DOCUMENT_TOKEN_TO_BE_REPLACED

However, a statement from the FA has now confirmed the red card has been rescinded. The same update also confirms that Bamford, who was widely condemned for appearing to deliberately get El Ghazi sent off, has been charged with ‘successful deception of a match official’ and faces a two-game ban.

The statement in full reads:

'Anwar El Ghazi will be available for Aston Villa’s next three matches after a claim of wrongful dismissal was upheld by an Independent Regulatory Commission. The forward was sent off for violent conduct during the EFL Championship fixture against Leeds United on Sunday [28/04/2019].

'Patrick Bamford has subsequently been charged with ‘successful deception of a match official’. It is alleged the Leeds United player’s behaviour in the 72nd minute of the fixture, which involved committing a clear act of simulation that led to Anwar El Ghazi being dismissed, amounts to improper conduct. The forward has until 18:00 on Wednesday [01/05/2019] to respond to the charge.

'In addition, Leeds United and Aston Villa have been charged with a breach of FA Rule E20. It is alleged they failed to ensure their players conducted themselves in an orderly fashion during the 72nd minute of the fixture. Both clubs have until 18:00 on Friday [03/05/2019] to provide a response.'

Leeds had to win the game with Villa to keep alive their hopes of beating Sheffield United to the final automatic promotion spot.

Having taken the lead through Mateusz Klich in controversial circumstances, as Tyler Roberts appeared to be indicating to the opposition players he would be kicking the ball out before sending the Polish international through on goal, Leeds United then allowed Villa winger Albert Adomah to run through and score unopposed - bar the efforts of Pontus Jansson - under the instruction of manager Marcelo Bielsa.

Both clubs now go into their final league games of the season with a playoff spot secure, whilst Derby County, Middlesbrough and Bristol City attempt to join them by finishing 6th.