Even officials can't help themselves it would seem, as a linesman approached Haaland for his signature after last night's match.

Ok, we'll admit, we're all losing it slightly over Erling Haaland at the moment. Virtually every club under the sun would take him right now and even though he didn't do too much last night beyond his lovely assist, you can't help but get excited when you see him on the pitch. Apparently, this goes for match officials too.

Following Man City's 2-1 win over Borussia Dortmund in the first leg of the Champions League quarter-final last night, the players headed down the usual in typical fashion. Well, all except for one player who got held up by the linesman.

We're no stranger to seeing players, young ones especially, asking for a peer's shirt after sharing the pitch with them for 90 minutes; when fans were still in attendance, they'd obviously try and get players' attention on the way out - but you'd struggle to recall an instance when you saw the match officials fanboying over a footballer so obviously.

The only other occasion that comes to mind is when a referee humorously booked Brazil legend, Kaka, and got a selfie with him afterwards, but that was just a bit of fun in a charity match, in fairness - and she cancelled out any supposed bias by giving him a yellow card in the first place.

Funny as it may be, to see the linesman succumbing to his inner child and asking for Haaland's autograph (still only 20 years old himself, keep in mind), as Rob Harris and the pundits in the studio at the time noted, it's hardly a glowing review of referees' impartiality. 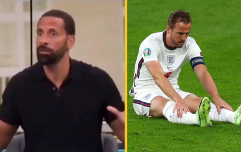 END_OF_DOCUMENT_TOKEN_TO_BE_REPLACED

On the other hand, it all counts for not really: Dortmund lost the game and the autograph hunting took place after the fact - you certainly don't expect it to have any real repercussions in the second leg. It just looked strange and completely out of place, didn't it?

Having got their away goal, Dortmund go back home with something to hang on to and you'd be lying if you didn't fancy Haaland to set the second leg alight next week. As we've heard so often already, this could be City's year but the young striking sensation - who has been linked with City ad nauseam - will, no doubt, do his darnedest to avoid that happening.

popular
Southgate explains why he didn't move drinks bottles like Ronaldo and Pogba
Cristiano Ronaldo is not human. Not human at all
"Not good enough" - Roy Keane rips England a new one as Scotland keep hopes alive
Ally McCoist was lighting it up on commentary with some killer lines
QUIZ: Name these 50 Euro Championship goalscorers
ITV revisit Highbury tunnel incident, but viewers feel Keane asked wrong question
Ronnie Whelan criticised for his commentary of 10th minute stoppage for Christian Eriksen
You may also like
1 hour ago
Hungary pull out 'celebration of the tournament' after opener against France
6 hours ago
Fans react to another disappointing Harry Kane display
20 hours ago
Damien Duff cracks out the hit parade after England hit the skids
20 hours ago
RTÉ lads slice up England's "so-called superstars" as they are booed off Wembley pitch
20 hours ago
"He needs to waken himself up" - Graeme Souness tears into Harry Kane
22 hours ago
Ally McCoist was lighting it up on commentary with some killer lines
Next Page