Erling Haaland was up against Sevilla and their two 20-year-old centre-backs in the Champions League, this evening. You honestly feared the worst for the Spaniards.

Pep Guardiola's side strolled to a 4-0 win over Sevilla to kick off their latest European Cup quest in languid, imperious style. Haaland scored his first two Champions League goals for City before Phil Foden and Ruben Dias finished them off.

END_OF_DOCUMENT_TOKEN_TO_BE_REPLACED

"This Man City team didn't really get out of first gear," former Manchester United defender Rio Ferdinand observed, on BT Sport. "They just chilled, stroked the ball about, upped the gears when they needed to and got goals at good times. I think the manager will be happy."

Erling Haaland finds the back of the net for Man City once again ✅#UCL pic.twitter.com/j797bedlDf

END_OF_DOCUMENT_TOKEN_TO_BE_REPLACED

As Erling Haaland scored his first and second goals of the night, the statistics and tweets started to roll in.

The Norwegian was playing in only his 20th Champions League game - across stints with Red Bull Salzburg, Borussia Dortmund and Manchester City - and registered his 24th and 25th goals.

The 22-year-old is now only behind 37 other players for all-time Champions League goals. His brace, this evening, saw him draw level with Edin Dzeko, Hernan Crespo, Mario Jardel and Robin van Persie - not a bad quartet. Up next is Mario Gomez (26 goals), Rivaldo and Luis Saurez (both on 27). Lionel Messi (125) and Cristiano Ronaldo (140) are the benchmarks, up top.

Another stat that quickly went viral was the Champions League statistics for the first 20 games in the competition of Erling Haaland and Cristiano Ronaldo. 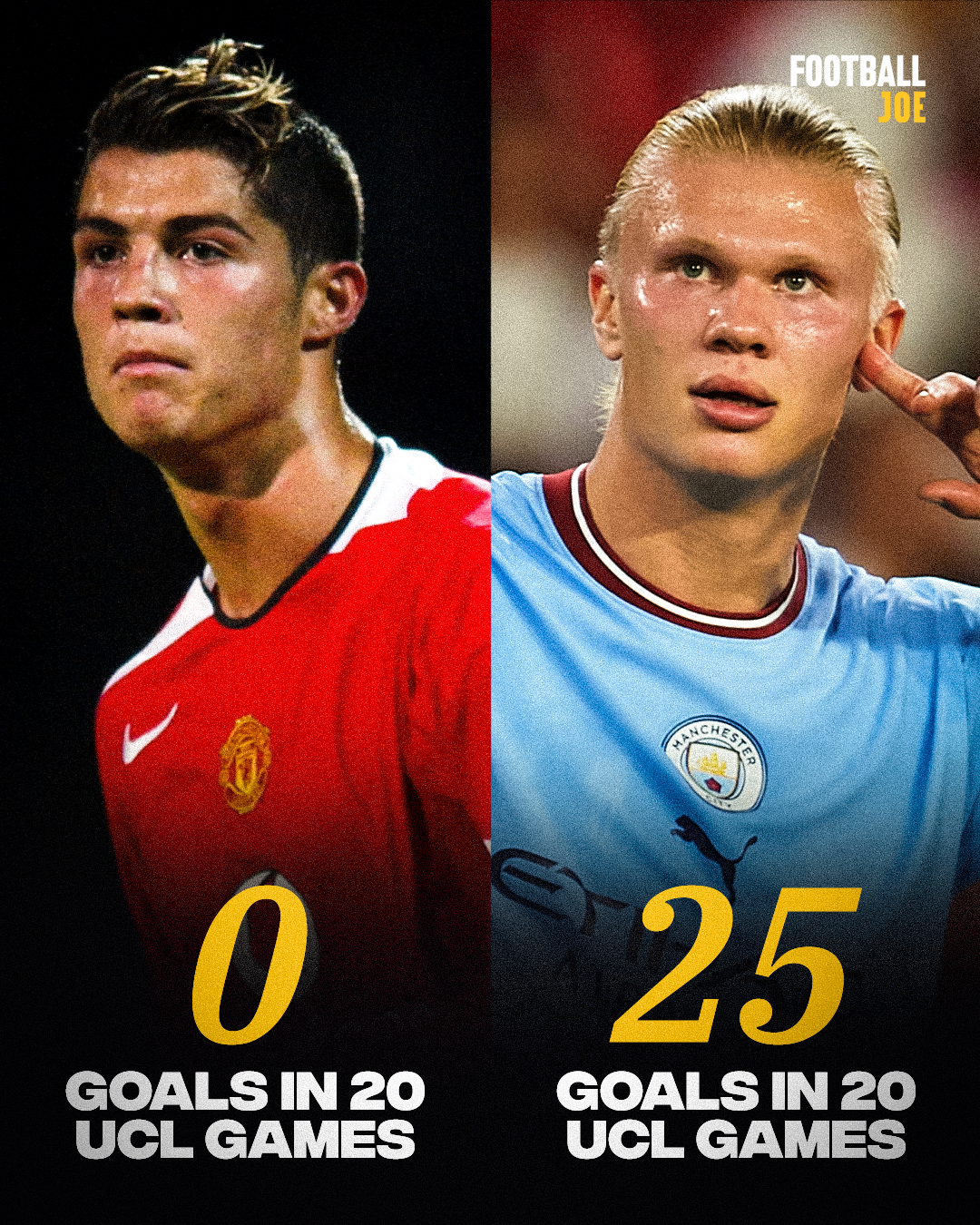 Worryingly, for fans of other clubs, Kevin De Bruyne reckons his Manchester City teammate can still improve. He told BT:

"I try to do my job. Make the right movements and try to create as many chances as I can and I know one way or another, Erling is going to be there. For the moment, he is scoring the goals so it helps us win the games.

"I think the way he's adapted to us is really good but I think outside the goalscoring there’s still another part in the game and I think that part is more tough to adapt to. It makes it more exciting. If he can adjust to the way we play, then the levels will go up."

As the footballing world descended into 'GOAT vs. Future GOAT' debates, Irish commentator Conor McNamara had a sporting comparison that few could argue with:

Been at most of Man City's games this season. The only comparison I can think of for Haaland's impact - coming into an already very good team - is when we first saw Jonah Lomu emerge with the All Black's. You just think: How is any opposition going to stop this guy?

If there is a way to stop him - for a prolonged period - no-one has figured it out just yet.