Erling Haaland is set to appear on Sky Sports' Monday Night Football tonight ahead of Everton's match against Arsenal at Goodison Park.

The Norwegian will join former Liverpool defender and pundit Jamie Carragher ahead of the Toffees' Premier League tie against Arsenal.

END_OF_DOCUMENT_TOKEN_TO_BE_REPLACED

It is unclear whether or not he will be in the studio. Considering the current coronavirus restrictions in Germany, it is more than likely that the frontman will appear on video. Sky Sports have Bundesliga rights, this season, so a timely push before the league's winter break would be helped massively with a Haaland appearance. 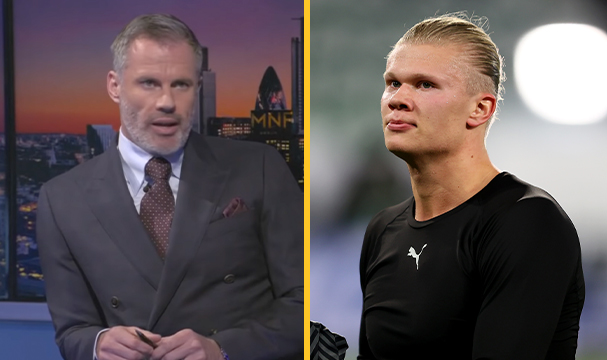 Rafa Benítez's side come into the match having lost six of their last seven matches, whereas the Gunners suffered defeat at the hands of Manchester United in their previous game.

Carragher confirmed on Monday afternoon that Haaland would make his MNF 'debut', expressing his delight at the news. Gary Neville is also going to be in-studio, along with host Dave Jones.

Haaland is known to have a keen interest in the Premier League and English football in general, with the forward being born in Yorkshire to former Leeds man Alf-Inge Haaland.

END_OF_DOCUMENT_TOKEN_TO_BE_REPLACED

The sought-after striker has been in scintillating form ever since his move from RB Salzburg to Borussia Dortmund in January 2020, registering 72 goals and 26 assists in 74 appearances for the Bundesliga outfit.

The 21-year-old scored a stunning goal in Dortmund's 3-2 loss against Bayern Munich at the weekend, but he made headlines after the game for the comments he made about referee Felix Zwayer.

Haaland was angry about a number of the referee's decisions throughout the game, making his feelings known in a post-match interview. The Norwegian said:

"I think it was a scandal when it comes to the referee. I asked him why he didn’t just go and look, he said ‘there’s no need’, he was arrogant but I will not say more."

The details around the youngster's feature on one of Sky Sports' most popular shows is somewhat unclear, but fans will undoubtedly be excited about hearing more from the devastating striker.