Former Liverpool man Dirk Kuyt has fallen foul of one of the most elaborate scams of all, according to Dutch reports.

Several Dutch newspapers are reporting that Kuyt, who now plies his trade in the Eredivisie with Feyenoord, fell victim to an elaborate con by a hotel butler who is accused of robbing guests' jewellery and selling them off without their knowledge.

The butler is alleged to have offered to keep the jewellery safe for the hotel’s clients, but swapped them for fakes after selling the real ones for thousands of euro. 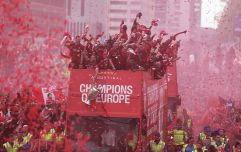 END_OF_DOCUMENT_TOKEN_TO_BE_REPLACED

De Telegraaf reports that Kuyt gave the butler, named as Marcel J, €200,000 for a diamond in good faith, which they planned to sell for a profit that they would split. Marcel J had worked as a butler at the hotel Noordwijk for over a decade.

However, when Kuyt had doubts about the deal and asked for his money back, he found out that butler had already spent it on other expenses.

The report claims that Kuyt was able to get some of his money back off Marcel J, but it is understood that he has taken legal proceedings to recoup the rest of the lost cash.

Kuyt, who is currently on holidays in the Dutch Antilles, refused to comment on the story.


popular
Rangers legend says he and Roy Keane didn't speak during Man United spell
Chris Sutton praises and throws subtle dig at Rangers after Europa League final loss
The coolest customer in hand-ball hoping to carry on the family tradition for Kilkenny
"Certainly not a position that I'd like to be in" - Rory McIlroy on Greg Norman controversy
Rhodri Giggs accuses Gary Neville of hypocrisy over Salford sacking
"I think there are only five Kilkenny players who are guaranteed to start on any given day" - Cody's motivational methods
FootballJOE's Career Path Quiz: #6
You may also like
1 day ago
David Meyler on how Kenny Dalglish almost signed him for Liverpool
2 days ago
Boris Johnson slams Jurgen Klopp for defending Liverpool fans booing national anthem
3 days ago
Chelsea team-mates 'shocked' as Andreas Christensen reportedly refused to play in FA Cup final
3 days ago
Pep Guardiola sets Southampton difficult task ahead of Liverpool clash
3 days ago
Liverpool and Chelsea fans go viral after bizarre FA Cup final confrontation
4 days ago
Jurgen Klopp admits he 'feels for' Chelsea after second cup final loss this season
Next Page