Atletico Madrid striker Diego Costa will miss his side's Champions League second round trip to Turin after picking up a needless yellow card in the first-half of the first leg in Madrid.

Juventus had won a free-kick outside of the Atletico box before Costa was booked by referee Felix Zwayer for stepping over the white line and encroaching on the free-kick taker. 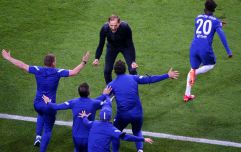 UEFA to scrap away goals rule next season

END_OF_DOCUMENT_TOKEN_TO_BE_REPLACED

Cristiano Ronaldo proceeded to blast his shot towards the Atletico goal with Madrid goalkeeper Jan Oblak doing very well to push the ball over the bar and behind for a corner kick.

Atletico recently signed Spanish international Alvaro Morata on a 18-month loan deal from Chelsea and the striker said that he always had intentions of linking up with Diego Simeone at the club.

'If I tell you the truth, the first contact was three-and-a-half years ago,' he told Spanish publication AS.

'I gave him my word that as soon as I was able to, I would come. It wasn't possible before.

'But it wasn't because of me. I gave him my word, and now I've come here it has been the time when I've talked with Simeone the least!'


popular
Paul O'Donovan busts the cliches and leaves the mystery behind him in one more emphatic interview
Ireland's rowing heroes on what everyone was shouting as they beat Team GB to bronze
Next time someone doesn't cut you slack for commuting to training, show them Joe Canning's words
Aidan O'Shea on gym work, training over lockdown and the importance of younger players bulking up
Warren Gatland with great response after being asked if he'll set up Twitter account
"Ah I suppose it's fine" - Paul O'Donovan and Fintan McCarthy are Olympic gold medallists
People are shocked after finding out how much an Olympic gold medal is actually worth
You may also like
1 month ago
Irish fans will be able to live-stream all Champions League football matches after new deal announced
1 month ago
Patrice Evra hilariously trolls Gallagher brothers after City's Champions League loss
2 months ago
It's no wonder the Chelsea players would follow César Azpilicueta into war
3 months ago
Super League: What are they proposing and why are people so angry?
3 months ago
Liverpool fan turns to tattoos and Cheryl Cole to inspire Madrid miracle
3 months ago
Even match officials fawning over Erling Haaland as linesman gets his autograph
Next Page