Former Chelsea and Newcastle United striker Demba Ba has accused the Daily Mirror of inciting hatred with its choice of front page in the aftermath of the Christchurch mosque shootings last Friday.

Ba, a practising Muslim, used the example of the Mirror's front page the day after the Orlando nightclub shootings on June 12, 2016 - in which 49 people were killed by a man who swore allegiance to ISIS - compared to their front page about the Christchurch shootings, which were carried out by white supremacists and led to the deaths of 50 people. 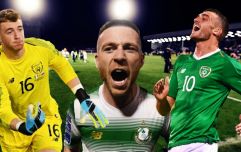 New-look XI that Ireland should start against New Zealand

END_OF_DOCUMENT_TOKEN_TO_BE_REPLACED

"ISIS maniac kills 50 in gay club," read the Mirror's front page that day, while the Christchurch front page features a photograph of one of the terrorists as a young child and reads: "Angelic boy who grew into an evil far-right mass killer."

The disparity prompted Ba to post a photograph of the two front pages side-by-side with the text, "Spot the Difference" above.

SHAME ON YOU @DailyMirror
You and all the other journalists that create hate among us people. pic.twitter.com/9D6fLCQe8b

"SHAME ON YOU Daily Mirror. You and all the other journalists that create hate among us people," said Ba, who currently plays for Turkish Super Lig side Istanbul Başakşehir, on Twitter.

Ba was praised for taking a stand in the aftermath, with a number of social media users thanking someone of his profile for doing so.

Australian Brenton Tarrant, 28, a self-described white supremacist, has been charged with murder in the aftermath of Friday's attacks.

New Zealand's government, meanwhile, is working towards announcing detailed gun law reform within days, according to New Zealand prime minister Jacinda Ardern, who said that her government had back gun law changes "in principle".