"It's infuriating to listen to O'Neill saying this stuff and actually thinking there's a logic to it when it's the worst possible thing an Ireland manager can be saying."

Martin O'Neill doesn't seem to realise that his method of selecting players for the national team means waiting for another manager to tell him a player is good enough.

O'Neill might argue that they're more of a finished product and ready to play for Ireland once they're playing in what he calls the big leagues but Dion Fanning would argue passionately than representing the Republic in what will be now be the third tier of the UEFA Nations League is not a step up from club football.

END_OF_DOCUMENT_TOKEN_TO_BE_REPLACED

So the Derry man rules out other players until other managers use them. He doesn't pick Patrick McEleney for his 973-man provisional squads because Gary Rowett or Alex Neill haven't signed him yet. And Ireland wait on Declan Rice and Jack Grealish and they wait and wait until they start proving themselves at a level way above what they would be playing at Lansdowne Road. 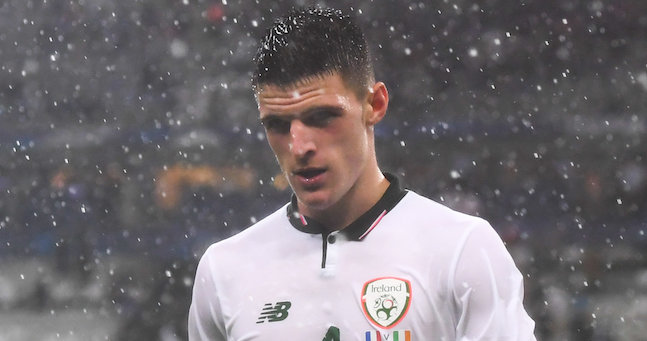 "If Declan Rice wants to step out of this miserable existence, nobody should blame him"

Declan Rice didn't make the squad for the Moldova qualifier at home, five months after he had mad...

On Wednesday night's Football Spin episode which followed Jose Mourinho's triumphant redemption in Turin, Dion Fanning reacted to Martin O'Neill's comments in response to League of Ireland players and to not selecting Declan Rice against Moldova.

O'Neill overlooked the implication that the players in question were good enough for Ireland and dismissed instead the idea that he should be handing out charitable caps.

"International football is not a higher level," he began.

"The idea that you must reach the Premier League and then you can go on - then you're equipped for international football - is wrong.

"Ireland international managers need to be seeing these players who can actually develop as international footballers at a different stage, rather than saying, 'let me see if they can do it at an England club. Let me trust in the English club system to develop these players for me and, if they do that, then that will be good enough for me and that will be the endorsement.'

"It's so limiting because you're reducing the players to players who are picked out by a random bunch of English managers whose judgement is as flawed as anybody else's."

And it's not just Declan Rice we've missed out on - it's Grealish, it's League of Ireland talents who could well be good enough, it's anyone who won't be looked at until the very moment another manager in England picks them.

"It feeds into this other idea about why O'Neill didn't pick Declan Rice for the Moldova game because he can't be going around qualifying people when it's not about that," Fanning said.

"The reason Declan Rice should've played against Moldova or whoever isn't about qualifying someone.

"It's the same with Jack Grealish. This is about O'Neill's judgement. It's about O'Neill seeing someone like Rice or Grealish at an early age and, at an early stage in their career, saying, 'this player is going to play international football for 10 years. We need to pick him now because he's going to develop.'

"And that's not just capping someone for the sake of it. It's recognising the ability of somebody and saying that we're going to need them so they should play for Ireland."

END_OF_DOCUMENT_TOKEN_TO_BE_REPLACED

Listen to the full discussion from 21:08 here or below.


popular
"I think Tyrone are going to go down this year" - O'Sullivan unimpressed by 2021 All-Ireland champs
January transfer window 2023: Follow the latest updates live in our hub
Owen Farrell praises Johnny Sexton in revealing interview ahead of Six Nations
Shane Lowry confirms amicable split from caddie after four and a half year partnership
British publication urges Gareth Southgate to claim Evan Ferguson for England
CCCC order replay of All-Ireland club football final
Two Ireland stars included in Premier League's 'young English XI'
You may also like
2 months ago
"I was called ‘the Northerner'" - Martin O'Neill opens up on his time as Ireland manager
4 months ago
Martin O'Neill lands calculated Stephen Kenny blow in post-match discussion
7 months ago
Martin O’Neill has his say on Ireland's performances under Stephen Kenny
11 months ago
Martin O'Neill has 'a great deal of respect' for Ange Postecoglou
11 months ago
Martin O'Neill says Roy Keane is 'a great fit' for Sunderland
3 years ago
'Emile dragged Dunne, Collins and Petrov across the dressing room to get to Martin O'Neill'
Next Page