West Ham United and Republic of Ireland defender Declan Rice has said that he was delighted to make a statement against his former youth side Chelsea on Sunday.

A second-half equaliser from Javier Hernandez earned the Hammers a 1-1 draw against the defending league champions at Stamford Bridge as Rice made his first start against his former club after he was released by the Chelsea Academy at the age of 14.

Rice was picked up by West Ham less than 48 hours after he was told he was surplus to requirements at Chelsea and on his return to the club he said that he was delighted to make a statement against his old side.

“I’ve come back here after being released by Chelsea at 14 and five years later I’m playing for West Ham in the Premier League,” said Rice.

"Sunday was a crazy day and one which me and my family are very proud of. Coming to Chelsea games as a kid, joining the club at seven and being released at 14, I don't think I need to prove anything, but today I felt I came back and made a statement and I was happy with my performance." 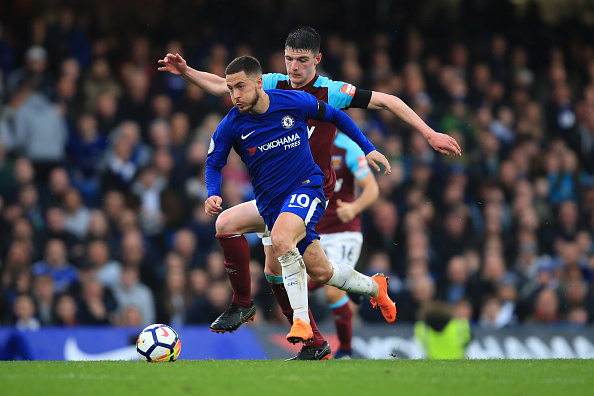 Rice added that he had prepared and studied Eden Hazard and Willian before the game but that you don't gain a full appreciation for their ability until the match starts.

END_OF_DOCUMENT_TOKEN_TO_BE_REPLACED

"We came out with a point and that’s massive for us going into the final six games of the season. It’s all about learning. I’d watched clips and obviously I know how Eden Hazard plays and how Willian plays, but you can’t really tell off a video until you face them in real life as you come up against different challenges.

“They played a few tricky one-twos and they did get in a couple of times, but in the second half we started to suss it out. It’s only going to help me build as a player, going up against these types of world class players.”


popular
You'll need your best form to name all the Premier League captains
QUIZ: Can you name the first professional teams of these footballers?
SportsJOE 2000s Football Quiz | Round 10
QUIZ: See if you can identify these retro football kit sponsors
Can you name every English football league club that begins with 'S'?
The SportsJOE 12 o'clock quiz | Day 115
"I’m not going to let myself get beaten by somebody who’s wearing the shoes if I’m not"
You may also like
10 months ago
Jose Mourinho wells up when talking about missing football
11 months ago
Premier League wrap: Are United back and can Chelsea turn it around?
11 months ago
Manchester United blow Chelsea out of the water as both search for new identity
11 months ago
Mourinho: City's B team are better than United, Chelsea and Arsenal
11 months ago
David Luiz looking for late move to Premier League rivals
1 year ago
Transfer report card: Grading the moves of the Premier League contenders
Next Page