Moyes is said to be their first choice to replace Rowett and Sam Allardyce is also under consideration.

David Moyes has emerged as the favourite to take over at Stoke City after it was confirmed Gary Rowett had been sacked as manager on Tuesday morning.

Rowett had been in charge of the Championship side for less than eight months, having been appointed following the club's relegation from the Premier League back in May.

Former Manchester United manager David Moyes was linked with the job last week and is currently the bookies favourite to take over at the club.

He has six months left on the deal he signed with Man United in 2013 👀 https://t.co/u4fvKsDk4j

Moyes is believed to be their first choice to replace Rowett. According to The Mirror, Moyes turned down the opportunity to manage Turkish team Fenerbahce during the summer. 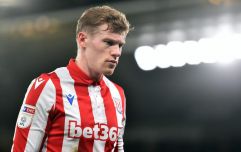 END_OF_DOCUMENT_TOKEN_TO_BE_REPLACED

Sam Allardyce is also under consideration, as well as Slavisa Jokanović, who helped Fulham earn promotion to the Premier League before being sacked in November.

"The club would like to thank Gary and his staff for their efforts over the past eight months.

"A new managerial appointment will be made as swiftly as possible but in the meantime, Rory Delap, Kevin Russell and Andy Quy will take charge of first-team affairs."

popular
QUIZ: Name every Chelsea manager hired by Roman Abramovich
Conor McGregor wants immediate Dustin Poirier rematch, for UFC title
The SportsJOE 12 o'clock quiz | Day 293
The SportsJOE 12 o'clock quiz | Day 292
SportsJOE 2000s Football Quiz | Round 20
"If Munster hadn't given him a contract, I'd say Leinster would have gone after him"
Quigley's shot from heaven is worth a year without hurling
You may also like
1 year ago
'He's seen red, got a brick and put it through Glenn Whelan's car window' - Jon Walters
1 year ago
"Liam Brady came in and said you'll never play for this club again"
1 year ago
Manchester United eyeing up Ireland underage defender
1 year ago
Jonathan Walters calls for better support for James McClean
1 year ago
James McClean receives disgusting, hate-filled, anti-Irish birthday card
1 year ago
Robert Huth opens up on 'difficult' Marko Arnautovic
Next Page