Much of the talk around Germany's Euro 2020 clash with Hungary has centred around Uefa blocking moves to light up the Allianz Arena in rainbow colours.

END_OF_DOCUMENT_TOKEN_TO_BE_REPLACED

The move was intended as a show of solidarity with the LGBTQI+ community during Pride. Uefa took it as a 'political' move by the city of Munich, and was aimed at Hungary itself, and a government that has markedly different views on equality and gay rights. A Uefa statement today declared, in part:

'For Uefa, the rainbow is not a political symbol, but a sign of our form commitment to a more diverse and inclusive society.'

In response to the Uefa dictat, the German FA are said to be handing out 10,000 rainbow flags to supporters attending the Euro 2020 group game.

Uefa's actions in recent days were discussed in the RTE studio by former Ireland internationals Richie Sadlier and Damien Duff. Both were scathing of the sporting body.

"Uefa had a choice here," said Sadlier. "They had an option to stand in solidarity with a community that has been routinely persucuted, marginalised and discriminated against, and attacked in locations all over the world. The most recent attack was from the Hungarian parliament. They had a chance to do that and they didn't.

"They've tied themselves up in knots. The statement there saying the rainbow flag is not political but the request to use it in the stadium is. They claim to be about certain values, and there's loads of statements. Today's one is the latest, where they claim to be about equality, respect, inclusion and openness for all. You can't credibly claim to be for those things if you run scared at the first opportunity of being up against someone that attacks those things, which is what they've done.

"I think they've blown it today, and whatever statements they put out now just read as hollow, cowardly statements."

With Sadlier catching his breath, Duff rolled up his sleeves and tagged in. The hammer was about to drop. 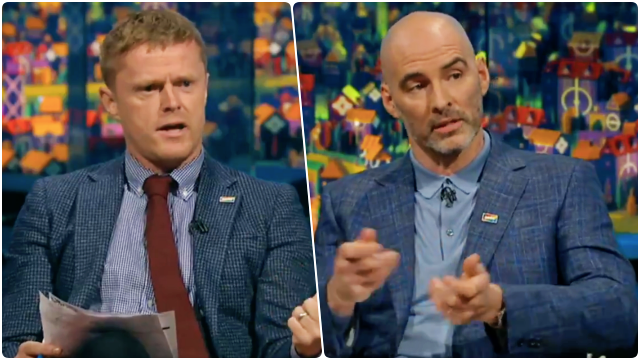 "To say [lighting the stadium up] is political is absolutely nonsense," Duff began.

"It was a chance to show support, and their support for the LGBT community, that's a global community - that's in Munich, that's in Budapest, where Hungary played France and there were homophobic chants and banners in the stadium.

"They talk about core values in their statement. Their core values, and not just because of today but my experience with them, it's just money and power. They're the two that jump out to me.

"They make out that they are about diversity and inclusion. A chance today to show that [but] absolutely not. The 'Respect' logo is everywhere, but not many people respect them because of the way they do their work."

The full video is available to view here and is well worth a watch.

Well said by Duff and Sadlier, and well pieced together by host Peter Collins.